Darkness on the Edge Of Town: 1977 Sessions Overview 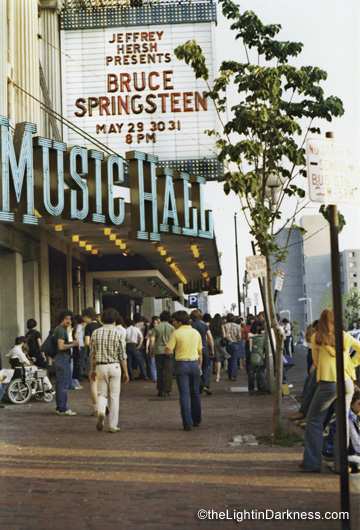 Springsteen reached a final settlement in his year-long litigation with Mike Appel on May 28, 1977. Effectively this meant that for the first time in a year Springsteen was able to go into a studio and record. He wasted no time. The “Darkness Sessions” began in early June 1977 at Atlantic Studios in New York City. Springsteen had a considerable amount of new material – but the songs were in various stages of writing completion. Consequently many of the songs were shaped over the course of numerous sessions spanning several months.

The sessions at Atlantic Studios were only two or three weeks old when problems surfaced. Bruce didn’t like the sound he was getting from the studio (particularly the drums). On top of that Atlantic did not offer a particularly comfortable or livable environment for the musicians. So there was a decision taken to shift operations to the nearby Record Plant (where most of the Born To Run album had been recorded). However they’d already made financial commitments to Atlantic Studios, plus on such short notice they were unable to find much un-booked studio time at the popular Record Plant. Consequently the period July and August 1977 saw Springsteen and the band recording at both studios – but mostly Atlantic. However from September thru late December all recording seems to have taken place at The Record Plant – where all the recordings issued on the original album emanate from.

The actual recording sessions for Darkness On The Edge Of Town were completed by early January 1978. The mixing sessions began in early January 1978 and dragged on until late March – there were a tremendous amount of different mixes considered, with Springsteen changing his mind on the mix of one song (“The Promised Land”) as late as early April. From March 1978 to the start of the Darkness tour in late May Steve Van Zandt and Max Weinberg were very busy at nearby Secret Sound Studios with Southside Johnny’s Hearts Of Stone album (released early October 1978). Springsteen donated two non short-listed songs from the Darkness sessions to the Southside LP project.

According to comments by Darkness sessions recording engineer Jimmy Iovine about 30 songs were recorded to a completed state and available for inclusion on the Darkness album. There were an unknown number of additional songs not fully completed. What “not fully completed” means is uncertain. At this stage 33 songs have been officially released (the 10 on the original album, 5 on Tracks and 18 on The Promise) but several of these have modern vocal takes, and their 1978 state remains unknown. There is also an unknown amount of not fully finished recordings. The list below contains 52 songs from the period that likely encompass all or nearly all of the 30 songs Jimmy Iovine was alluding to, as well as most of the ones never completed.

The audio from the Darkness sessions that has surfaced unofficially over the years has been of rather disappointing quality. During the late 1970s and 1980s most of it was of very weak quality. However over the past 15 years lower generation audio specimens have emerged and the CD-era boots of this audio have been a noticeable improvement over their vinyl era counterparts. Yet in many cases it has become apparent that there were flaws in the way the original source individuals taped these studio sessions. There certainly appears to have been some hidden “fly-on-the-wall” type tapings. The other problem is that much of the leaked audio is of early studio workouts of these songs, rather than later, fully realized renditions. Most of the leaked studio material emanates from the June-October 1977 period, so the later November 77-January 78 sessions may include several other songs that remain undocumented, even after the release of The Promise.

The 2010 release of The Promise is somewhat of a double-edged sword. We now have a slightly better understanding of the Darkness sessions, as well as access to several tracks that were previously unknown to us such as “Save My Love” and “Breakaway”. However, the wonderful notebook facsimile included in the box set lists titles of many songs that are totally new to us. It is unknown how many of these songs were actually recorded. Many may not be songs at all – just titles. Jimmy Iovine mentions in the making of documentary that Springsteen wrote 70 songs for potential use on “Album IV”. It remains a possibility that even the 70 songs mentioned by Iovine is a conservative estimate of Springsteen’s true output at this time.