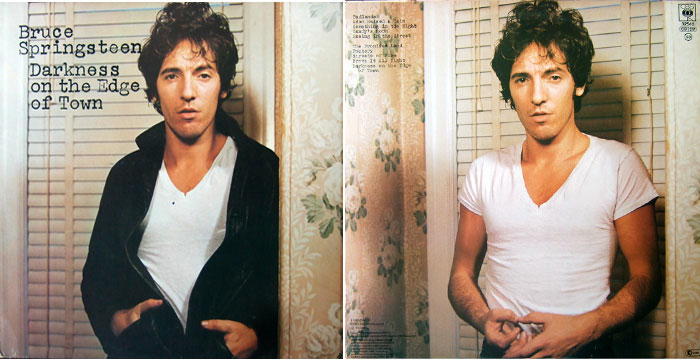 Bruce Springsteen shed some light on the iconic cover to his 1978 classic Darkness on the Edge of Town. While talking about the deluxe multimedia reissue of the album, Springsteen credited the stark photography of New Jersey native Frank Stefanko. “The Boss” talked to Britain’s The Guardian and explained how the then-unknown novice photographer created one of the most iconic shots of his career, saying, “He was a guy who’d worked in a meat-packing plant in south Jersey. He got the 13-year-old kid from next door to hold a light. He borrowed a camera. I don’t know if he even had a camera! But when I saw the picture I said, ‘That’s the guy in the songs.’ I wanted the part of me that’s still that guy to be on the cover. Frank stripped away all your celebrity and left you with your essence. That’s what that record was about.”

Springsteen touched upon the music contained between the two famous Stefanko photos on the album, admitting, “I was never a visionary like (Bob) Dylan, I wasn’t a revolutionary, but I had the idea of a long arc: where you could take the job that I did and create this long emotional arc that found its own kind of richness. 35 years staying connected to that idea. That’s why I think the band continues to improve. You can’t be afraid of getting old. Old is good, if you’re gathering in life. Our band is good at understanding that equation.”

Springsteen says that he’s comfortable at how his career has evolved, and the freedom of having a lot of music outlets at his disposal, and being able to play whatever material interests him: “The nice place about where we’re at, at this point, is, is we’re pretty free to do whatever we want, you know? We can go out and play a little bit if we wanted to, we don’t have to have a record out — sort of not being central, gives you a lot of freedom to just make your music.”