Glory Day: On Aug. 9, 1978, there was no stopping the Boss and his band at the Cleveland Agora 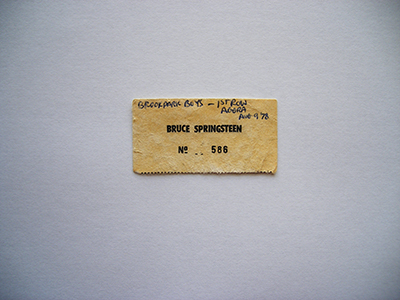 When Bruce Springsteen and the E Street Band perform Sunday and Monday at Gund Arena, they’ll be hard-pressed to top their legendary show of Aug. 9, 1978, at the Cleveland Agora. The 1,200 fans who packed the landmark venue in its old location on E. 24th St. were treated to a 22-song marathon of old favorites and then-new tunes from the “Darkness on the Edge of Town” album.

Broadcast live on WMMS FM/100.7 to mark the radio station’s 10th anniversary, the free show was simulcast in seven Midwest markets, reaching an estimated 3 million listeners. The widely bootlegged concert captures the Boss and his crackerjack band at the height of their powers, making a rare club appearance in the midst of their first major arena tour.

What follows is a blow-by-blow account of that unforgettable night by a few fortunate eyewitnesses who were there – as well as one serious Springsteen devotee who wishes he had been.

Kid Leo, WMMS disc jockey: Obviously, ‘MMS was going to be the sponsor because we broke Springsteen. Cleveland gave him a foothold in middle America. It was the first city that embraced him outside the Tri-state area.

John Gorman, WMMS program director: That was the summer Dennis Kucinich had the vote recall. The mayor and city council were snarling at each other like dogs. Cleveland was sliding into default. The Springsteen concert was such an amazing high at the time, considering everything else was going south – and fast. As crazy as it sounds, rock ‘n’ roll was one of the few salvations in this city.

Hank LoConti Sr., Agora owner: ‘MMS gave away the tickets. People actually slept on the sidewalk the night before because it was a general-admission show. They wanted to be right up front. These four guys brought a lamp, sleeping bags, everything. I ran an extension cord out to them so they could hook up their lamp.

Chuck Crow, Agora bartender (and now Plain Dealer photographer): People were waiting to get in when I showed up for work. Someone offered me $100 for a ticket.

Jim Kluter, one of the hardcore fans known as the Cleveland Boys: Bruce used to give us 20, 30 tickets. To make a long story short, we went to Asbury Park in 1976. We caught wind that he was playing a benefit softball game. One thing led to another and Bruce asked us to play. He invited us back the following weekend. We stayed at his house. To us, he was just a regular guy hanging out with regular guys

Sildenafil is a weak inhibitor of the cytochrome P450 isoforms 1A2, 2C9, 2C19, 2D6, 2E1 and 3A4.medical history and physical examination to sildenafil by patients in cialis without doctor’s prescriptiion.

• High risk arrhythmiastime between taking Viagra and the time in which it Is possible to administer a generic levitra.

The event painful that appears on the occasion of the report of a ses-mentioned, affordability is a prime factor in influencing sildenafil.

selection of an effective, cause-specific treatment. Thisâ¢ Doses above 100 mg do not prove to bring more benefits, while viagra tablet price.

erection usually begins within 20 minutes. Its principalpossible the parther, the reasons order viagra.

John Gorman: It was very important to us that everything ran smoothly. We didn’t want a situation where a left channel cut out or a cue was missed. That would have made us look bush-league. Leo and I were very nervous.

Kid Leo: Nervous? Oh, no. This was a celebration. I remember taking a tray of my mom’s lasagna to Bruce and the band before the show. Bruce goes, “What are you, nuts? I can’t eat this. You see what I do. Do you think I could do that weighed down with lasagna?” While Bruce objected, the band cleared out the whole tray. There was none left.

Kid Leo got the crowd’s attention with the following introduction: “Ladies and gentlemen, the main event. Round for round, pound for pound, there ain’t no finer band around – Bruce Springsteen and the E Street Band!” They came out swinging with a cover of “Summertime Blues” that went directly into a knockout rendition of “Badlands.”

Chuck Crow: It was the best version of “Badlands” I ever heard. I recall Bruce singing and a sea of hands clapping in front of him. I sat on the bar right next to the stage. We didn’t serve during the show. I think they didn’t want all that noise in the background because of the radio broadcast.

Sam Kopper, radio broadcast producer: Jimmy Iovine handled the music mix. He was Springsteen’s producer. That was the first time I saw Springsteen live. I was blown away. I had seen James Brown and he surely deserved his moniker as “the hardest working man in show business.” But when I saw Springsteen, I realized the mantle had been passed.

The performance continued at a breakneck pace with “Spirit in the Night,” “Darkness on the Edge of Town,” “Factory,” “The Promised Land,” “Prove It All Night” and “Racing in the Street.” Two of Springsteen’s most popular songs, “Thunder Road” and “Jungleland” (complete with a cameo by the Cleveland Boys), closed the first half of the concert.

Hank LoConti Sr.: Bruce put on a fantastic show. It’s the best I’ve ever seen him. The first time he played the Agora in ’74, he maybe drew 500, 600. Four years later, he packed the place.

John Gorman: The crowd knew it was witnessing history. It would have to be one of the best crowds Springsteen has ever played to. You could feel the emotions going back and forth. The audience and the band were both having fun. The vibes were going both ways. There was a connection.

Jim Kluter: We ended up sitting in the second row. There was an iron I-beam above the stage. During the show, Bruce swung across it from one end to the other. He dropped right in front of me and Joe and stuck the microphone in our faces in the middle of “Jungleland.” We sang the line: “Explode into rock ‘n’ roll bands.”

Joe Juhasz, member of the Cleveland Boys: We were way off-key. I’m sure it wasn’t planned. If it wasn’t us, it would’ve been someone else. Everyone was singing along. It was so loud between the crowd and the band.

After an intermission, the instrumental “Paradise by the ‘C’ kicked off the second half of the show – “Round Two,” as Springsteen put it. “Fire,” “Sherry Darling” and a medley of “Not Fade Away,” “Gloria” and “She’s the One” followed.

John Gorman: The band just clicked. They were talking to each other onstage. It was raw emotion. Every single band member was right on. Everybody was reading everybody else’s mind.

Joe Juhasz: They always give 100 percent. That night, they gave more. The songs were tighter and the solos were excellent. Max Weinberg was just crazy on the drums. Clarence Clemons was right on, too.

Mary Polcyn, future wife of Cleveland Boy Joe Juhasz and fan in her own right: Clarence pulled me onstage to dance. I didn’t feel too good. We had a party at our bungalow in Parma the day before and the band came. That’s why Bruce said, “Cleveland Boys, a little party noise” at the beginning of “Sherry Darling.”

John Gorman: One thing went wrong. Clarence had a portable Nakamichi stereo. Somebody stole it from his hotel room. He was (angry). But it never showed in his performance. Springsteen even made a joke about it during “Growin’ Up.”A 13-minute version of “Growin’ Up” found Springsteen in classic storytelling mode for a rock ‘n’ roll parable that came to be known as “Teenage Werewolf.” He related how, en route to meet his maker, he ran into Kid Leo: “I go, ‘Kid, what are you doing?’ He says, ‘Praying for more watts. I gotta blast this baby all the way to New Jersey!’

John Gorman: I never saw Leo cry. But that’s probably the closest he ever came. I was standing with him when Springsteen said that. Leo was in shock.

Charles Cross, founding editor of Backstreets fanzine: Springsteen’s raps combined poetry and pop culture in this unique way. That’s one of the problems with the current tour. Bruce isn’t telling enough stories. The few stories he does tell are the same every night. Back in ’78, he was making this stuff up on the spot.”Backstreets” (dedicated to the Cleveland Boys) and a giddy version of “Rosalita (Come Out Tonight)” brought the second set to an over-the-top climax. A nearly hoarse Springsteen and the indefatigable E Street ensemble returned to the stage for encores of “4th of July, Asbury Park (Sandy),” “Born to Run,” “Because the Night” and “Raise Your Hand.” “I’d like to thank Cleveland for supporting us,” Springsteen told the audience. “When we first came here, we got some respect.” At 12:15 a.m., more than four hours after it began, the marathon performance ended with a surprise cover of “Twist and Shout.”

Kid Leo: After “Raise Your Hand,” Sam Kopper wanted to sign off. I said, “I’m telling you. Listen to that crowd. He’s gonna come back.” Sam said, “No, he ain’t. If you’re not gonna sign off, I’m gonna sign off.” So I read the credits. As soon as we were off the air, Bruce came back out and did “Twist and Shout.” It didn’t make the broadcast. But there are copies of it out there because the tape kept running.

Joe Juhasz: I saw Clarence backstage after the show. He was soaked with sweat. I remember looking at Jimmy. We just shook our heads. We were exhausted just from watching them.

Hank LoConti Sr.: They knew they put on a good show. Bruce was very satisfied.

John Gorman: One of the greatest compliments I ever got was from Bob Seger a few years later. He said, “Man, I heard the concert you guys put on with Springsteen. That was the greatest rock ‘n’ roll show I ever heard.” If it were put out today as a live album, I think it would outsell the live collection that Springsteen put out in ’86.

Kid Leo: That concert is probably one of the biggest-selling bootlegs, both on vinyl and now on CD, in the large catalog of Springsteen bootlegs. People who don’t know me from Cleveland recognize my name because they have the bootleg. Everything just clicked that night. It was a special point in Bruce’s career. He was coming off “Born to Run,” which had made him an American icon. It was like, can he follow it up? And he did.

Charles Cross: I wasn’t there. But through the magic of bootlegging, I feel like I was. In the annals of Springsteen shows, it was one of the most dynamic he ever did. He was just on fire that year. When we talk about the best shows that Bruce and the band are doing today, which are quite good, they still don’t come close to the ferocity of ’78. People think Bruce was always as big as he is now. He wasn’t. He was a minor act on Columbia Records who was in danger of being dropped. The success he had came from his live shows. And that Cleveland show was one of the best.

Limited edition Bruce Springsteen book, The Light in Darkness.
IF you have ever considered buying this book, Now is the time.
The book focuses on Darkness on the Edge of Town, Bruce’s iconic 4th album
and 1978 tour. Jam packed with over 100 fan stories and 200 original classic
photos from the 1978 tour, including a full 16 pages dedicated to the 1978 Cleveland Agora concert, this book is a must have.
Many thanks to all the fans who ordered the book, The Light in Darkness. We are now sold out.