Darkness on the Edge of Town at 30+ 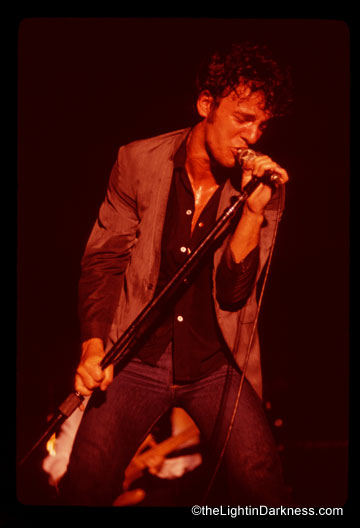 “Occasionally, a record appears that changes fundamentally the way we hear rock & roll, the way it’s recorded, the way it’s played. Such records – Jimi Hendrix’ Are You Experienced, Bob Dylan’s “Like a Rolling Stone,” Van Morrison’s Astral Weeks, Who’s Next, The Band – force response, both from the musical community and the audience. To me, these are the records justifiably called classics, and I have no doubt that Bruce Springsteen’s Darkness on the Edge of Town will someday fit as naturally within that list as the Rolling Stones’ “(I Can’t Get No) Satisfaction” or Sly and the Family Stone’s “Dance to the Music.”

So began Dave Marsh’s Rolling Stone magazine review of Darkness on the Edge of Town, published in July of 1978. Thirty years later, we are armed with the knowledge that Marsh has been Springsteen’s greatest critical champion, his biographer, and his friend. But does that necessarily render his 1978 opinion invalid? Even then, Marsh had to know the gamble he was taking. In 1978 he was already known as a close friend of Jon Landau, the rock critic turned producer who, over time, would become Springsteen’s manager and advisor, and in all likelihood the single most important person to the development of his career. In fact, Marsh and Landau had been together at the 1974 Springsteen show which became legendary because of what Landau wrote about it: “I saw rock and roll future, and its name is Bruce Springsteen.” In effect, Marsh was placing every ounce of his credibility on the chopping block – had the album proven to be a stiff, few people would have taken him seriously again.

Marsh needn’t have worried. In 2008, the relevant question is not “Is Darkness on the Edge of Town a great album?,” but rather “How great an album is Darkness on the Edge of Town?” And the answer is that Marsh was correct – Darkness today stands as a landmark of rock history, as well as the most important album that Bruce Springsteen has made. And here’s where I take a deep breath, gaze over the precipice, and jump – it is his best album.

There’s a Pete Townshend quote about Darkness that I remember, because it is a pretty good summation of what the album is about. If I remember correctly, it went something along the lines of “what Bruce Springsteen is singing about on his new album, that’s not fun – that’s f*cking triumph, man.” But what Townshend said is only partly true, because while triumph is a part of the story, it’s not the only part. When the last notes of the last song are played out, you’re still not certain how things are going to end– the protagonist is defiant, but could very well be trapped at the same time, with a final chapter left to be written at some point in the future.

The tone is set at the very beginning, in the first words of “Badlands”:

Lights out tonight
trouble in the heartland
Got a head-on collision
smashin’ in my guts, man
I’m caught in a cross fire
that I don’t understand
But there’s one thing I know for sure girl
I don’t give a damn
For the same old played out scenes
I don’t give a damn
For just the in betweens
Honey, I want the heart, I want the soul
I want control right now

“I want the heart, I want the soul, I want control right now.” And there you have it, in a nutshell. From that point on, the album depicts a life’s journey, and the battles – simple or otherwise – which must be fought, sometimes on a daily basis, to keep from “dying little by little, piece by piece,” as he later sings in “Racing in the Street.” As the album progresses, each individual song raises the ante, making clear just how high the stakes are. The music’s intensity is like nothing Springsteen had previously recorded (even Born to Run, great as that album was), and the lyrics match that intensity, verse by verse and word for word:

In the darkness of your room
your mother calls you by your true name
You remember the faces, the places, the names
You know it’s never over it’s relentless as the rain

Nothing is forgotten or forgiven,
when it’s your last time around,
I got stuff running ’round my head
That I just can’t live down

“Something in the Night” (a particular favorite of mine, for what should be obvious reasons)

I’m wandering, a loser down these tracks
I’m dying, but girl I can’t go back
‘Cause in the darkness I hear somebody call my name
And when you realize how they tricked you this time
And it’s all lies but I’m strung out on the wire
In these streets of fire

Everybody’s got a hunger, a hunger they can’t resist,
There’s so much that you want, you deserve much more than this,
But if dreams came true, oh, wouldn’t that be nice,
But this ain’t no dream we’re living through tonight,
Girl, you want it, you take it, you pay the price

“Prove It All Night”

“Darkness on the Edge of Town” 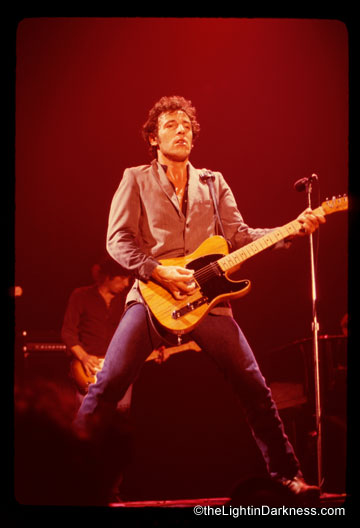 By this point, it should be clear that the journey is not over. But there is hope, there is faith, and there is the drive to sustain both through the long days and nights yet to come – in the battle against what critic Greil Marcus would later call “a long, uncertain fight against cynicism.”

It would be criminal to praise Springsteen’s songwriting on this album without also giving due praise to the band which gives the songs their life. Simply put, the band is amazing. There are enough great musical moments on Darkness to last most bands a lifetime, whether it be the late Danny Federici’s heartbreaking organ on “Racing in the Street,” Roy Bittan’s beautiful piano introduction to “Something in the Night,” or the general brilliance of the rhythm section throughout. Though the Big Man is featured less on this album than on others, when his time comes on “The Promised Land” and “Prove It All Night,” he is there to deliver. And while the production by Springsteen, Landau and Steve Van Zandt has been criticized by some over the years for being too muddy, I think that’s unfair – the instrumentation throughout is clear as a bell, and the album has a sound that is entirely appropriate to the depth and gravitas of the material.

But in the end, what takes Darkness from being simply outstanding to that rare level of greatness which few albums reach are the four songs that serve as the album’s bookends – on Side 1, “Badlands” and “Racing in the Street;” on Side 2, “The Promised Land” and “Darkness on the Edge of Town.” All four are among the best songs Springsteen has written, and it is no accident that two of them – “Badlands” and “The Promised Land” – remain, thirty years later, the moral and emotional centerpiece of his live concerts.

Dave Marsh wrote that the promise of Bruce Springsteen was “That someday, Bruce Springsteen would make rock & roll that would shake men’s souls and make them question the direction of their lives. That would do, in short, all the marvelous things rock had always promised to do.” Since 1978, Springsteen has made good records, he has made excellent records, and he has made great records. But in terms of the impact that Marsh described, Springsteen has never topped Darkness on the Edge of Town. And for that reason, it is his best album.