Following up Born To Run is something that seems like a monumental task, but given the pressure Bruce Springsteen experienced in earlier parts of his career, it probably didn’t seem like such a tall mountain to climb. When Springsteen released Born To Run, Columbia Records basically treated it as the 25-year-old’s last chance to write something that could make them some money. Luckily, Springsteen churned out one of the most fantastic records of all time, launching himself into stardom as a household name and a worldwide presence. Need further evidence as to his importance other than his extensive world touring after the record? On Oct. 27, 1975, both Time and Newsweek put Springsteen on their respective covers, with Time calling him “Rock’s New Sensation.”

The 1978 follow-up to Born To Run was Darkness On The Edge Of Town, a hard-hitting, ten-track album that showed Springsteen’s progression as a musician. This time, Springsteen had a different kind of pressure, and following up a phenomenal record might have been a relief compared to the negative energy associated with the Born To Run sessions when he was essentially writing to save his career. Springsteen and The E Street Band kick off Darkness in killer fashion, with the dominating “Badlands.” Springsteen has always made his mark on opening songs, and “Badlands” proves to still be a phenomenal live song. Clarence Clemons’ saxophone parts in the track are some of his E Street Band highlights, and the lyricism is predictably incredible: Poor men wanna be rich, rich men wanna be kings, And a king aint satisfied till he rules everything, I wanna go out tonight And show them what I’ve got.”

“Candy’s Room” gave fans something different from The Boss. Whereas most of Springsteen’s early work is full of weaving storytelling and drawn-out musicianship, “Candy’s Room” is an under-three-minute track that was one of Springsteen’s catchiest at the time – second to probably only “She’s The One.” The guitar solo in the bridge is to-the-point, and it’s about as rock’n'roll is anything can be. “Candy’s Room” also kicks off the most important chunk of Darkness, as it is followed by “Racing In The Street” and “The Promised Land.” 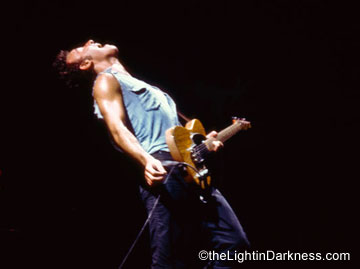 “Racing In The Street” is a piano-led ballad that got a good amount of attention in live shows following the release of Darkness but was put on the shelf by Springsteen until more recent tours. While alternate versions are better than the album version, the song still has great imagery to it and is one of the best low-key Springsteen tracks. Meanwhile, “The Promised Land” made its way to become one of the more celebrated tracks in The Boss’ catalog, as many diehards I’ve met proclaim it as their favorite song. The lyrics here are worth noting as well, as Springsteen smoothly delivers, “I’ve done my best to live the right way / I get up every morning and go to work each day / But your eyes go blind, and your blood runs cold / Sometimes I feel so weak I just wanna explode / Explode and tear this whole town apart / Take a knife and cut this pain from my heart / Find somebody itching for something to start.” Later in the song, we’re hit with another great pre chorus: “Gonna be a twister to blow everything down / That ain’t got the faith to stand its ground / Blow away the dreams that tear you apart / Blow away the dreams that break your heart / Blow away the lies that leave you nothing but lost and brokenhearted.”

In typical Springsteen fashion, the last two songs on the record deliver a shock as well, and the one-two punch of “Prove It All Night” and the title track just make you want to flip your record over and start again from the beginning. Springsteen’s flailing vocals in the title track provide one of my personal favorite moments from The Boss, and the guitar line in the track is tough to beat. 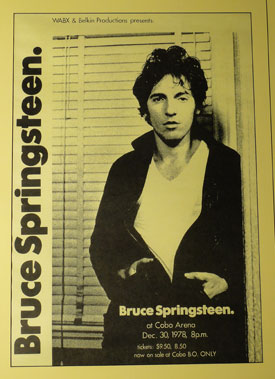 As interesting as Darkness is as a whole, it’s also extremely interesting to look back at the material that didn’t end up being used for the record. In order to keep the theme of the album intact, Springsteen scratched some songs that actually went on to become well-known singles for other artists – “Because The Night” for Patti Smith, “Fire” for Robert Gordon, and “This Little Girl” for Gary U.S. Bonds are a few examples. Still other songs would wind up on the double-disc release of The River.

Darkness On The Edge Of Town would be the best record for a lot of artists, but not for Bruce Springsteen. While the record isn’t as good as Born To Run, it was extremely important for the group that the record wasn’t overlooked. It certainly led to some different times with double-disc release of The River, which is why the first four Springsteen records are where I’d recommend any prospective fan to begin their journey into The Boss’ life work.