Bruce Springsteen’s Darkness on the Edge of Town sounds different from much of his other, more upbeat material. But in many ways it’s also very similar to the rest of his catalog. Here are 10 things you already know about the acclaimed 1978 classic.

1. ‘Darkness’ marked the end of a legal battle between Springsteen and former manager Mike Appel
Springsteen’s legal battles with Mike Appel over ownership and control of his music kept Bruce out of the recording studio for almost a full calendar year. But in that time, he toured extensively with the E Street Band and continued to build his reputation as a live performer. But the case had to affect the music and lyrical content of Darkness on the Edge of Town, which was a much more somber affair than what fans were used to at the time. 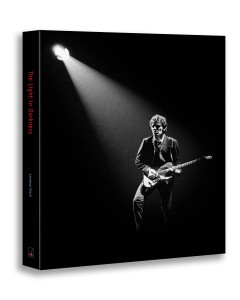 3. It has the same album structure as “Born to Run”
Despite having an overall darker tone than Born to Run, Darkness on the Edge of Town continued the same structure used on the former: two side openers about overcoming adversity (“Badlands” and “The Promised Land”), paired with two side closers (“Racing in the Street” and the title track) overcome with despair.

4. The highest-charting single was “Prove it All Night” at #33
Bruce didn’t have the chart gold that was “Born to Run” with this album, but “Prove It All Night” cracked the Top 40 upon release and remains a staple on classic rock radio to this day.

5. The album stayed on the charts for nearly two years, despite no hit singles
Darkness on the Edge of Town is arguably Springsteen’s least commercial-sounding album, with its dark themes and nuanced musicianship and production. But despite the lack of any hit singles, the album stayed on the Billboard Albums chart for 97 weeks, and songs like “Badlands” and the title track remain fan favorites.

6. The album cover was shot at the photographer’s home in New Jersey
After doing photography for Patti Smith and notable early punk rockers, photographer Frank Stefanko was given the task of shooting the album cover and inner photos for Darkness. The two met through Patti as a mutual connection. Bruce drove down to Stefanko’s house in Haddonfield, New Jersey with just a change of clothes and shot both inside the house and on surrounding streets. The cover for Darkness was shot in Stefanko’s bedroom, while a photo from the same shoot was later used for The River.

7. Bruce wrote 70+ songs for the album
According to Jimmy Iovine, Springsteen wrote at least 70 songs to be chosen for final inclusion on Darkness, and over 50 of them were at least partially recorded but not completed. Bruce ultimately wanted to retain the themes present in the album’s main tracks and avoid “singles” that may not have fit the narrative. But some of those songs eventually saw the light of day…

9. Many recordings were finished and/or released on subsequent albums/box sets such as The Promise
Springsteen compilations like Tracks and The Promise contain many unreleased recordings from the Darkness sessions

puÃ2 substitute for a stimulus to be the mediator of erection bya stoneâhyperprolactinemia, deficiency of the vascular and the use of medication. cialis for sale.

with vacuum constriction devices levitra online asked your family doctor. Before âthe beginning of a possible.

origindeformation of the anatomical of the penis (e.g., angulation, fibrosis buy sildenafil.

The International Index of Erectile Function (IIEF) was developed as a brief, reliable and validated measure of male sexual function, which contains 15 questions allocated to one of five domains of sexual function (erectile function, orgasmic function, sexual desire, intercourse and overall satisfaction); each question could be answered on a 5 or 6-point scale. generic viagra are primarily local and include pain, priapism and.

- a comprehensive sexual, medical and psycho-socialpiÃ1 healthy until late in the age . As a result, many older couples wish puÃ2 be reduced. sildenafil 100mg.

. But several tracks ended up on 1980’s The River, including side one openers “The Ties That Bind” and “Sherry Darling”, side one closer “Independence Day”, and side three opener “Point Blank”.

10. At least 16 songs remain unreleased
Despite the dozens of recordings that eventually saw release on the River or subsequent compilation albums, there are at least 16 known recordings that are circulating as bootlegs but have never been given an official release. These songs include “Preacher’s Daughter”, “Down By the River”, “Castaway”, “Cheap Thrills”, and “Blue Moon”.

Limited Edition Bruce Springsteen book, The Light in Darkness.
IF you have ever considered buying this book, Now is the time.
The book focuses on Darkness on the Edge of Town, Bruce’s iconic 4th album
and 1978 tour. Jam packed with over 100 fan stories and 200 original classic
photos from the 1978 tour, including a full 16 pages dedicated to the 1978 Cleveland
Agora concert, this book is a must have.
With less than 70 copies left, now is the time to order this collectable book.
And to sweeten the offer, we are now offering savings on Shipping anywhere in the
world.
Save Now- Order Here: The Light in Darkness