American Madness Becomes Darkness on The Edge of Town, And More.

Peter Watts, 1001 Albums You Must Hear Before You Die.

Thanks to a legal dispute with former manager Mike Appel, Springsteen had three years to bask in the stellar success of Born To Run, and to contemplate its follow-up. The resulting album, Darkness On The Edge Of Town, is a very different beast from its predecessor. 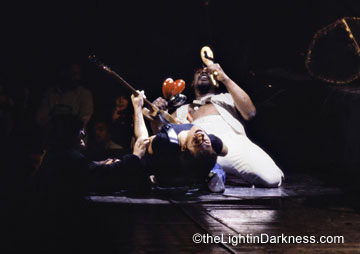 Like Dylan before him, Springsteen withdrew from fame, moving to a farm in New Jersey so he could refocus on “life in the close confines of the small towns I grew up in.” He wanted to “write about the stress and tension of my father’s and mother’s life that came with the difficulties of trying to make ends meet.” (The album was originally to be called “American Madness,” after a Frank Capra movie about the Depression.) Fatherhood is one of the album’s themes (“Adam Raised A Cain”); struggle another (“Streets Of Fire,” “Factory”). These are songs about small-town frustration, sometimes sexual (“Candy’s Room”), sometimes social (“The Promised Land”).

Being Bruce, the angst is tempered with romance, particularly for the road — many songs involve driving, either for escape, for thrills, or both — but musically, this is a much more subdued affair than Born To Run. Clarence Clemons’ sax is rarely heard. Instead, Springsteen’s guitar and Roy Bittan’s measured, melancholic piano set the tone.

Uplifting, downbeat, bleak, and mad as hell, Darkness… is a spellbinding B-movie epic to follow the blockbuster of Born To Run.

On this long awaited effort, Springsteen eschews the tight dense sound of his acclaimed “Born To Run” to put the emphasis on his unique throaty singing style. While more sparse, the music is equally powerful, with the seven-man band behind Springsteen aided by the studio prowess of the producers along with Steve Van Zandt, Jimmy Iovine and Charles Plotkin. Springsteen’s lyrics continue their exploration of doom and adolescent angst as perceived is small New Jersey towns. This is the type of album that grows with each listening. Best cuts: “Adam Raised Cain,” “Factory,” “Prove It All Night,” “Darkness On The Edge Of Town.”

Also like Stevie Wonder, Springsteen did not merely record enough tracks to fill an album, but wrote many songs and selected numbers that would work together to produce the effect he desired. As with Stevie, some numbers were given to other artists, some retained for future albums, and several consigned to seemingly interminable limbo.

The effect Bruce and his producers did create with this album was intense and powerful, too strong for AM radio. Though several tracks were outstanding, none emerged as hit singles, “Prove It All Night” and “Badlands” peaking in the mid-third of the Hot 100. In 1987, Darkness on the Edge of Town was chosen by a panel of rock critics and music broadcasters as the #59 rock album of all time.

From the cover photos to the contents, it’s clear that this is the statement of a changed man; the boyish beliefs have been supplanted by hard won knowledge of the “real” world. (Obviously, reflection of two years of court battles with his first opportunistic manager which kept him out of the recording studio where he might have capitalized on the resounding acclamation accorded Born to Run.) Darkness on the Edge of Town echoes with the honed down gritiness of material that reflects more the reality than the romance of his beloved road. Highlighted by Bruce’s painfully potent vocal outpourings and his slashing guitar, it includes some of his strongest material, “Promised Land,” “Badlands,” “Adam Raised a Cain” and the title cut.

On this, the flip side of Born to Run, the idealism of those characters turns into stark terror once they hit adulthood. This is where Springsteen’s reputation as a working-class mouthpiece is based, but there’s much more here than that.

Coming after a long legal battle to extricate himself from a management deal, Darkness on the Edge of Town is indeed darker than Born to Run but not without redemptive hope in songs such as “Badlands” and “The Promised Land.” This may well be Springsteen’s best batch of songs, though the production is criminally flat.

After a three-year absence imposed by legal battles with his former manager, Bruce returned with a blistering tour de force that really showed off his band. Though the production is a little rough, this cathartic record is tight and direct with some of his most resonant songs. Turning to the troubles of adulthood, it offered a brooding, stark version of life for his characters and yet hope shines through — “I believe in the promised land,” indeed.

For anyone who might have thought Bruce Springsteen couldn’t sustain the creative arc and evolutionary path attained on his breakthrough album, Born to Run, Darkness on the Edge of Town proved them soundly wrong. With this astounding album, the New Jersey native took his bar-band boogie from the boardwalk to sold-out shows across the States and let everyone know that he would forever be “The Boss.”

With a title that hints at the invisible corners in life that some can’t see into and others choose not to see at all, Darkness‘s lyrics represent a streetwise poeticism that is lofty without being highbrow and straightforward without being simplistic. From the badlands to the Promised Land with the wastelands and the heartland in between, Springsteen travels across the American dream as his cast of outsiders, dreamers, and quiet failures yearn for redemption, wisdom, and escape. On “Prove It All Night” he sings “Everybody’s got a hunger, a hunger they can’t resist / There’s so much that you want, you deserve much more than this,” epitomizing that basic sense of hope that his song writing of this period captured so eloquently. You got the sense when you listened to Springsteen that he wanted the same things as his tortured characters. So, when he sang “For all the shut down strangers and hot rod angels rumbling through this promised land / Tonight my baby and me, we’re gonna ride to the sea” in “Racing in the Street,” you knew that he too was gonna drive to the sea if it was the last thing he did. And you loved him for it.

Kicking up a notch the wall-of-sound aesthetic he had so successfully employed on his previous LP, Darkness on the Edge of Town takes out all the exuberance and joy from the mix and leaves the listener to contemplate the music’s sombre underbelly. This set of material ranks as one of the great examples American song writing and helped place Bruce Springsteen in the pantheon alongside the likes of Bob Dylan and Johnny Cash. And that is where he remains decades later, still standing as one of the most vital and influential rock ‘n’ roll artists of all time.

Darkness on the Edge of Town was voted the 68th greatest album of all time in a VH1 poll of over 700 musicians, songwriters, disc jockeys, radio programmers, and critics in 2003.

Springsteen Summer Tour 2012 Book Sale
Discover the Limited Edition Bruce Springsteen book, The Light in Darkness.
The Light In Darkness is a collector’s edition, we are almost sold out. Less than 225 copies remain. A great companion piece to The Promise box set, it focuses on the 1978 Darkness on The Edge of Town album and tour.
Read about the iconic concerts from fans who were there- the Agora, Winterland, Roxy, MSG, Capitol Theatre, Boston Music Hall, The Spectrum and over seventy more!