Bruce Springsteen’s Concerts: 1975-2012 A Journey of Shooting the Boss

Bruce Springsteen’s show at the Music Hall in Boston on December 3, 1975, is what I remember the most. I still think it might have been the best concert I ever witnessed from over 1000 shows I’ve attended and photographed. I was an admirer since Greetings from Asbury Park was released. I did see him as “the new Dylan” with all the words and content. I connected to it the same way I did to Dylan. My college buddies didn’t care for it, even made fun of it and ridiculed me for liking it. One day there was a contest by DJ Ellen at Midnight on WQBK in Albany to win a copy of the just released LP. All you had to do was call up. Nobody did for over an hour. I was working in my darkroom in my apartment and finally, after many pleas from Ellen over the air, I just called up and claimed the album. Boy, am I glad I did. 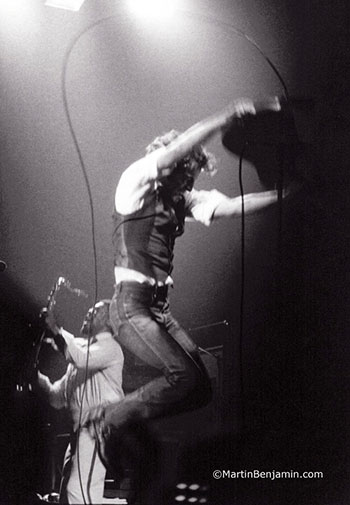 My friends dissed it entirely – “trite, too wordy, stupid, immature” is what they thought. Walter, Don, Larry, and Dennis are the same guys that couldn’t stand Jackson’s “Late For The Sky” or Neil’s “Harvest” and preferred the first Led Zeppelin, Mott The Hopple, Slade and NY Dolls. This was eventually funny because one night a few years later they called me from their new digs in Swampscott, Massachusetts and offered me a ticket to Bruce at the Music Hall the next night. They had scored tickets and Dennis had to work and couldn’t attend. I dropped everything and headed to Boston.

I remember Bruce ending that show being carried off the stage on a stretcher by medics after collapsing on stage [damn, it seemed real], only to throw back the sheet at the curtains, leap up and go full speed ahead into another string of songs. When the show finally ended the doors opened to the streets of Boston, but many fans held their ground and kept making noise. As the hall was emptying out and with the house lights on, Bruce came bounding back again and shouted, “Don’t believe everything they tell you” and launched into second extended encore. Fans ran back into the theater accompanied by others who had not even been to the show but saw the pandemonium on the street and the open doors and ran in. He manically plunged into his Detroit Medley and played another 30 minutes. 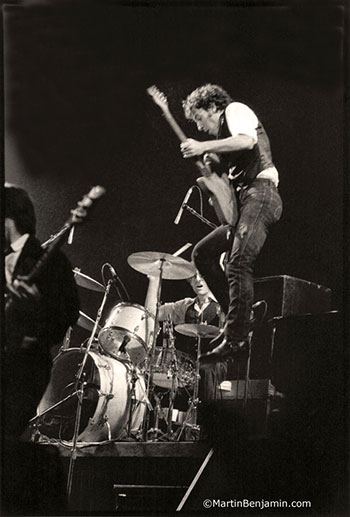 When the show was announced for Albany in 1978 I had started shooting music concerts for local publications, but learned that no photographs were allowed and cameras were not permitted to any Bruce show for this tour. I don’t recall much about the show, except stuffing a Leica M4 in my jeans and my companion hiding a 135mm lens in hers. I think the tour had started the night before in Buffalo and was heading to Philadelphia and Boston after Albany. The show was mildly disappointing to me, since I was unfamiliar with the new Darkness album material that had not been released yet. I still wanted to see the 1975 Bruce! I snuck taking my photos and got one really good one of Clarence and Bruce, shoulder to shoulder, jamming. The next day I called the Village Voice to offer the photograph, but they said their photographer would shoot the show in NYC. Knowing that no photographers were being given credentials and people were being searched for cameras I just sent the photo to the Voice anyway. The next Thursday when I got the paper up in Albany my picture was published. It was my first nationally published photograph and the beginning of my business RockShots® which has continued on to now, photographing music concerts for the last 35 years. 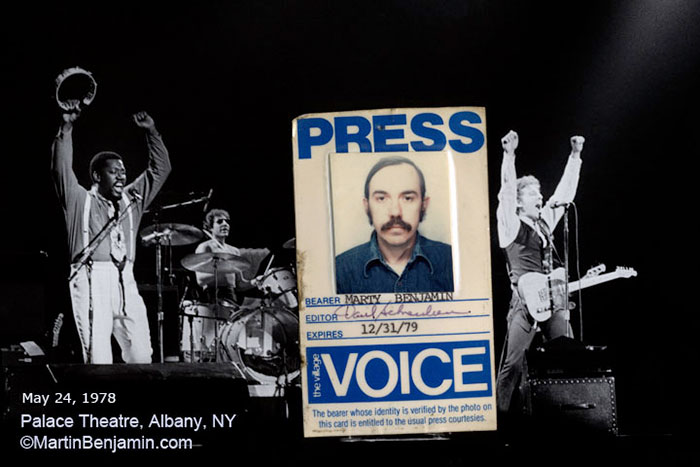 Later in the fall, The Darkness tour came back through, playing at Rensselaer Polytechnic Institute in the RPI Fieldhouse on November 12, 1978. The night of the show I felt bummed I wasn’t going so I just grabbed my camera and drove over to Troy, NY and bought a $5 ticket from a frat guy selling lots of them outside the arena. With my Nikon FM camera and 200mm lens under my jacket, I just walked in. I never went to my seat. I just kept heading up to the stage from all angles where the same guy would scream at me from the edge of the stage to stop, move back and go away [Jon Landau?]. I managed to photograph the show from much closer, figuring if I got thrown out it was worth the $5. I shot the whole show. I remember it more vividly than the May show in Albany. Bruce was flying around the stage, leaping in the air over and over, and the show had much more energy. Maybe it was a bigger stage than Albany, or it was just much later in the tour and the performances had skyrocketed. I knew the material by then and it did blow me away. 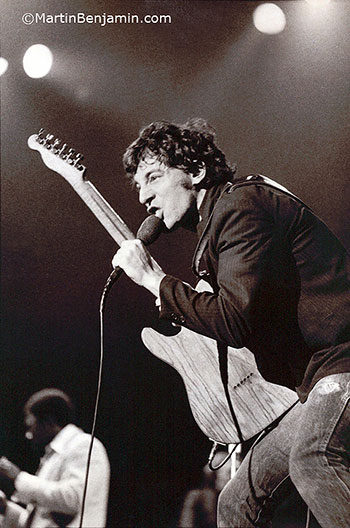 This summer I photographed Bruce in Fenway Park, and that concert was a throwback to 1978 – a nice touch for everyone attending, but especially to me, over thirty years later.
For me, the two best Bruce shows, out of about 8 or 9 I’ve seen, are ironically the first and last ones – December 3, 1975 at the Music Hall in Boston and August 15, 2012 – the second night in Fenway. Not that any of the others ones were ever disappointing, but the bookends 38 years apart were, by far, the best for me!

You can view a selection of Martin Benjamin’s original photography here:
www.martinbenjamin.com

Limited Edition Bruce Springsteen book, The Light in Darkness.
IF you have ever considered buying this book, Now is the time.
The book focuses on Darkness on the Edge of Town, Springsteen’s iconic 4th album and 1978 concert tour. Read about the live concerts from fans who were there – the Agora, Winterland, Roxy, MSG, Capitol Theatre, Boston Music Hall, The Spectrum and over seventy more, this book is a must have. With less than 25 copies left, now is the time to order this collectible book. We are offering savings on Shipping anywhere in the world.
Save Now- Order Here: The Light in Darkness