ALBUMS OF OUR LIVES: BRUCE SPRINGSTEEN’S DARKNESS ON THE EDGE OF TOWN

Elizabeth and I took our first road trip a few months into our relationship. As the miles went by on the interstate, I changed CDs, one hand on the wheel while the other one slid the discs into and out of the 24-disc wallet I’d used for a decade.

Elizabeth fidgeted in her seat, a move that I’d come to recognize as signifying agitation and discomfort.

“You keep changing the music,” she said. “On trips, I just leave the same CD in the whole time.”

As we went on, from dating to engagement to marriage, I learned this about Elizabeth: she would listen to the same CD, sometimes the same song, over and over and over. For me, a former record store employee with a music collection that overtook an apartment wall, music was about discovery, the chance to hear something before anyone else, the chance to love a band or singer-songwriter at ground level, to say you heard them first.

But Elizabeth taught me there was beauty in repetition. Listening three times in a row unlocked nuances in albums I thought I already knew. A fourth listen made the experience transcendent; a fifth sent it back down to its most human core.

Elizabeth loved Bruce Springsteen more than any other artist. She’d go through phases with single albums; for a long time, she played Born to Run. (Once, as the CD started over, I reached for the eject button. Over piano and harmonica, Elizabeth grabbed for my hand. “You don’t fuck with ‘Thunder Road,’” she said.) On a trip to Arizona, she discovered our rental car had satellite radio, and we listened almost exclusively to E Street Radio. For birthdays and anniversaries, I bought her CD copies of the albums she’d grown up listening to, and we’d listen to them together, arguing about whether the live version’s energy surpassed the studio version’s precision. We decorated our first Christmas tree while the video of Hammersmith Odeon, London ’75 played, Springsteen in his stocking cap our version of Saint Nick. 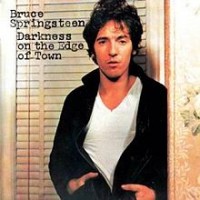 Bruce Springsteen Darkness on the Edge of Town

For our second wedding anniversary, I bought her 1978’s Darkness on the Edge of Town, Springsteen’s first album after his breakthrough with Born to Run.

Elizabeth loved the album, and it took up permanent residence in our car. We sung along wherever we went, sometimes skipping ahead to our favorite tracks: “Badlands,” the album’s opener, with its “whoa-whoa-whoa-whoa” lead-in to the chorus; “Racing in the Street,” a sad lament of lost hopes and dreams denied. “Candy’s Room” was my favorite song, because the rush I felt when Max Weinberg’s drums kicked in as Springsteen sang, “We kiss / my heart’s pumping to my brain” reminded me of the first time Elizabeth and I had kissed, a moment all nerves and passion, the kind of chance for glory that so many of the songs strove for and never found.

Going by number of plays, the final and title track, “Darkness on the Edge of Town,” was Elizabeth’s favorite. Springsteen had followed his “four corners” approach, in which each side started out bright and hopeful, and then closed with that hope unraveled. In the dark, as we drove home, hope twice unraveled, Elizabeth would softly sing. “Now some folks are born into a good life / Other folks, they just get it anyway, anyhow,” she whispered over Springsteen. She claimed she had no talent for song, but as the miles of the interstate slipped by on our return to our home, I loved the sound of her voice more than anything else in this world.

I got the phone call about her brother at a departmental end-of-semester party on a Wednesday afternoon. Unconscious, the voice on the other end said. We don’t know what will happen. By the time we’d gotten packed and shuttled the dog to the kennel, we knew that we were driving down to say goodbye to him, that at the end of that road from Virginia to Alabama was a bed surrounded by machines to be switched off one by one.

We loaded our suitcases into the trunk and laid the garment bag with a black suit and black dress on top of it. I sat in the driver’s seat, and as I turned the key, I pressed the button to switch from CD to radio. I knew that whatever we listened to for the drive would forever be the Music We Listened To On the Way There, and I wanted not to ruin the album for Elizabeth.

From the passenger seat, her voice tiny, she whispered, “Thank you.”

We drove, our soundtrack the top-40 stations of the Southeast, I-95 to I-85 to I-20, hoping to stay ahead of a winter storm coming in from the west. We listened to music that would vanish in six months. I had never been more grateful for the disposability of pop music. We pulled into the hospital parking lot at three in the morning, and in the moment between shutting off the car’s engine and opening the door to her waiting father, there was a brief moment of silence, the first I’d heard in hours.

We sold that car a few months ago. We hadn’t really driven it since it developed some problems that no mechanic seemed able to diagnose, and we’d bought a new car. I cleaned out the old car, pulling out the detritus of a hundred trips. Dozens of maps, brochures from historical sites and national parks, stale Cheetos. I found four pens between the passenger seat and door, lost as Elizabeth worked on trips while I drove.

Under the center console, I found Darkness on the Edge of Town, the CD case sticky with spilled soda. Springsteen still stared out from the cover, white T-shirt and black leather jacket, window behind him. We hadn’t listened to it since the day before the phone call, seventeen months earlier.

We haven’t listened to it since, either.

Colin Rafferty lives in Virginia, where he teaches nonfiction writing at the University of Mary Washington. Recent essays have appeared in Witness, Utne Reader, and elsewhere. He’s currently at work on a series of essays about the Presidents.