“Those jokers in the front row were so close I thought I’d have to introduce them with the band”.
The quote was from Bruce Springsteen in a review printed in the Detroit Free Press Oct. 5. 1975, the day after I had witnessed the single greatest live event of my life.

Thanks to my job as a ticket taker at the Michigan Palace and my father’s insistence that we see Bruce live, we ended up as one of the lucky few sitting in that front row. From the moment Bruce literally flung himself into the audience and on top of my father, I was hooked. Thirty-seven years and more than thirty shows later, I’m still hooked. 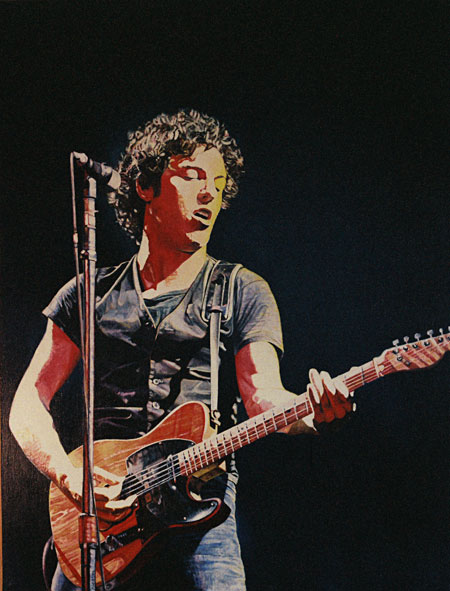 I had been studying and practicing art since early in high school when I saw Bruce again in February of 1977. Once more in the front row, I decided to shoot some photographs that I could use as reference for a painting. My earlier works had been encouraging, and in fact I had already sold six portraits to the rock-soul group WAR who I had been a fan of since 1973. Not even the fact that one of the members of the group had bounced two checks on me could deter me from a career in art!
The reasons for doing a portrait were obvious to me. Bruce was the one artist-musician who captured everything I thought an artist should be. He was passionate, hard working, dramatic, moral, and topped it off with a tremendous sense of humor.

The ’77 show supplied me with enough good photos to compose my painting of Bruce. I started working on it later that year while attending college at Wayne State University in downtown Detroit. I wanted to have it completed by the next time the E Street Band came through town.
The “Darkness on the Edge of Town” tour had begun in May of 1978 and it wad announced that the band would play the Masonic Temple auditorium on September 1. This would be my best opportunity to show Bruce my work. After phoning around, I finally located the bands hotel, the Renaissance Centre, along Detroit’s waterfront.

On the day of the concert I went to my parents’ home to borrow their car so that I could transport the large painting to the hotel. My dad took one look at the clothes I was wearing, raggedy jeans and a paint stained shirt, and demanded that I put on something nice if I expected to meet Bruce Springsteen. My protests unheeded, I relented and ended up wearing a pair of dress paints and a freshly pressed shirt.

It was late afternoon by the time my friend Leo Yassy arrived to help me get the painting to the hotel. The crate I had constructed for transport was over 65″ long and stuck halfway out of the trunk. As we pulled into the hotel parking space another auto backing out rear-ended my dad’s car, smashing the crate in the process. Leo screamed at the driver of the other car while I stood by in shock, staring at the mangled crate imagining the damage inside to my painting. However, my fears were groundless because luckily, the painting was unharmed.

We finally hauled the 75lb. crate into the hotel lobby and word spread rapidly that there was a great Springsteen painting waiting for the “Boss” to see. One by one, members of the band and crew filed down to the lobby to get ready to depart for the nights show. They each shook my hand and told me how much they liked my painting.

Bruce and Jon Landau were the last to come down to the lobby. I was sure that by that time they had heard I was there with my painting. As Bruce finally arrived in the lobby, he could see the painting propped up against the wall as he approached.

“How come you’re so dressed up,” he asked as he shook my hand. I could only laugh to myself.
We talked for a short time and he told me how good he thought my painting was. He asked if I was coming to the show that night and I informed him that I had been unable to get tickets. Bruce immediately responded, “Don’t worry about that”. 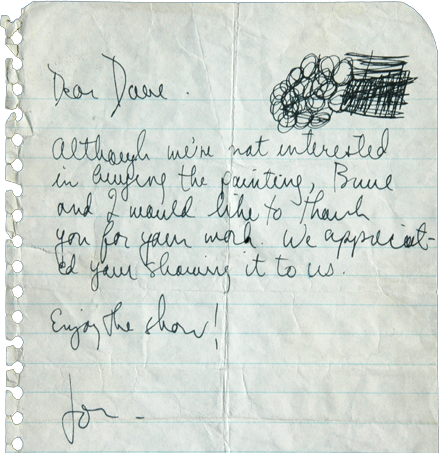 Jon Landau approached me as Bruce and I were finishing our conversation and asked me if I was selling the piece and, if so, for how much. I had not been prepared for this question. Without time to think, I responded,” $500.” Landau said he would need time to think about it. He told me that he would leave me four tickets at the box office for the nights show. At that time I was to come around to the side of the stage to see if he would be interested in purchasing the work. I was walking on air.
I phoned two more friends to meet me at the Masonic Temple for the concert. When I arrived at the box office, my tickets were waiting along with a note from Jon Landau informing me that they were not interested in purchasing the painting, but Bruce and he greatly appreciated my showing it to them.
The seats and the show were fantastic. I was feeling great about the whole experience. One of the roadies who had been at the hotel saw me at the show and told me that Bruce never buys artwork of himself. That eased my disappointment.

Three months later I entered the painting titled “Religious Rock” in an art show at the Detroit Artists Market. Within days Stuart Eisenberg, an attorney and Bruce Springsteen devotee, purchased the painting. It was my first painting sold out of an art gallery.

Having lived in Chicago now since 1980 I occasionally find myself coming back to Bruce as a subject matter for my work.

Hopefully with each new canvas I have captured another facet of what Bruce Springsteen has meant to me.

Limited Edition Bruce Springsteen book, The Light in Darkness.
IF you have ever considered buying this book, Now is the time.
The book focuses on Darkness on the Edge of Town, Bruce’s iconic 4th album
and 1978 tour. Jam packed with over 100 fan stories and 200 original classic
photos from the 1978 tour, including a full 16 pages dedicated to the 1978 Cleveland
Agora concert, this book is a must have.
With less than 35 copies left, now is the time to order this collectible book.
And to sweeten the offer, we are offering savings on Shipping anywhere in the
world. The perfect gift for the Springsteen fan in your life.
Save Now- Order Your Copy Here: The Light in Darkness