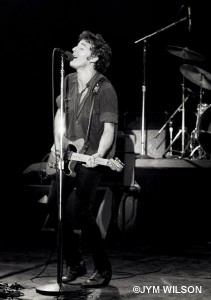 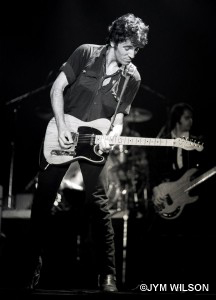 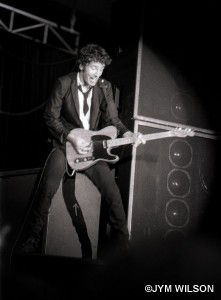 I’ve been listening to Bruce Springsteen’s music since the fall of 1975 when I joined a group of friends huddled around an AV department record player in the waiting room outside the high school guidance dept. offices to listen to Born to Run. To this day I can remember how his songs spoke to me and told me that there was a world outside of South Burlington, Vermont that I needed to get to ASAP.

Fast-forward to 1978. I had been listening to Springsteen closely for three years. A friend from New Jersey had introduced me to the first two records. Then Darkness came out and finally, he was coming to town.

Nov. 4, 1978 changed the way I knew music could be performed live. I was a 20-year-old part-time lab tech for The Burlington (Vt.) Free Press who liked to take photos, especially of rock concerts. I had been to a few shows at the University of Vermont’s Patrick Gymnasium but this one had the biggest anticipatory buzz that I’d ever encountered. I went to the side door the press was supposed to enter through, entirely certain that the prerequisite phone calls I had made and my press pass would get me in. But no. Someone at the door told us “No photos tonight. We can give you handout, (photos).” But our tickets would still be good. So one lens went down one boot, another in the other boot and the camera goes around the back and under the jacket. Through the door and to my seat. While waiting for the show to begin, a friend from high school appeared at my side. “I’m sitting with you,” she announced, dropping into my lap. Did I mention that mine was a fourth row seat? 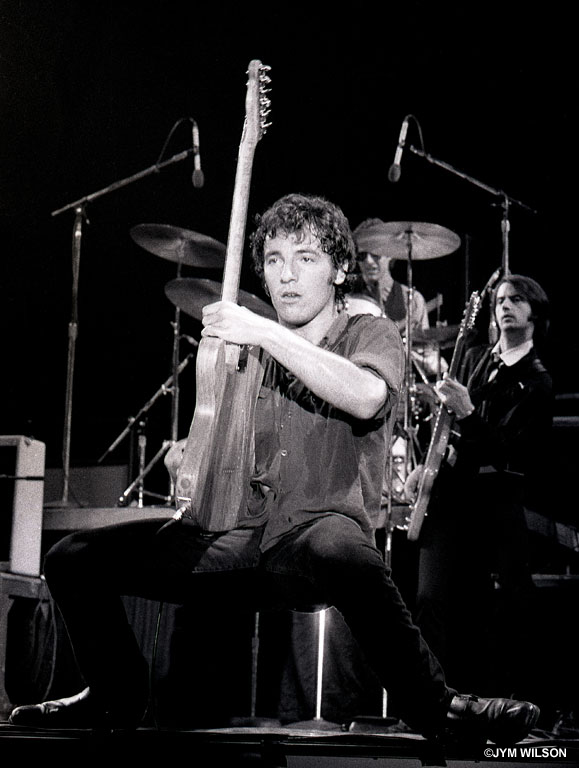 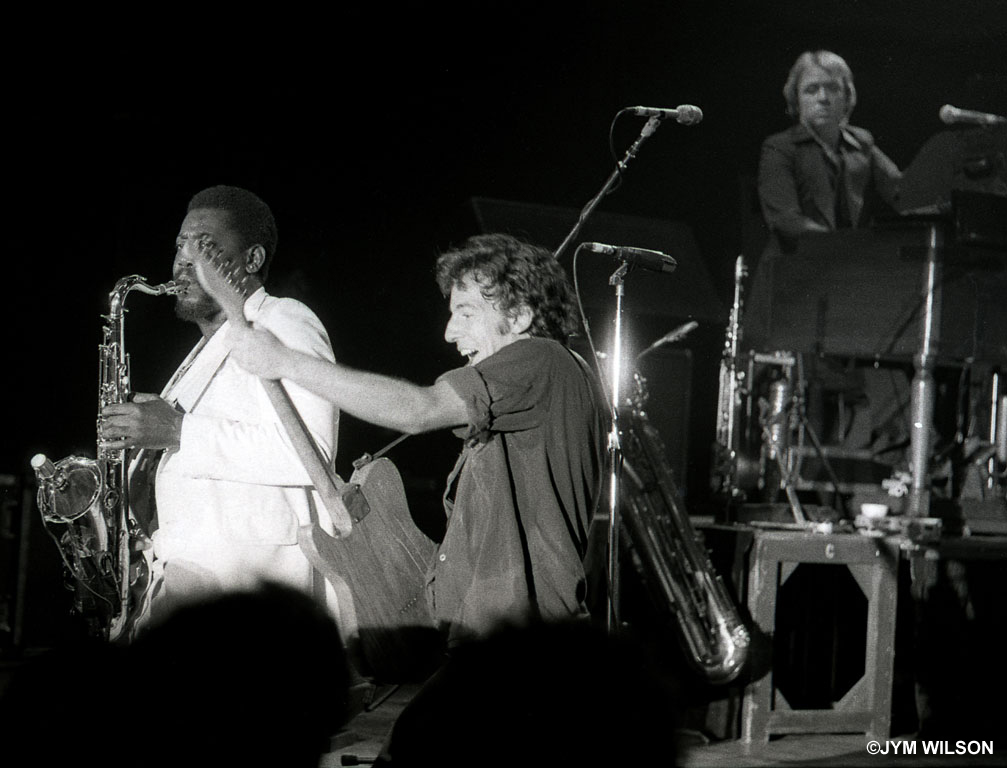 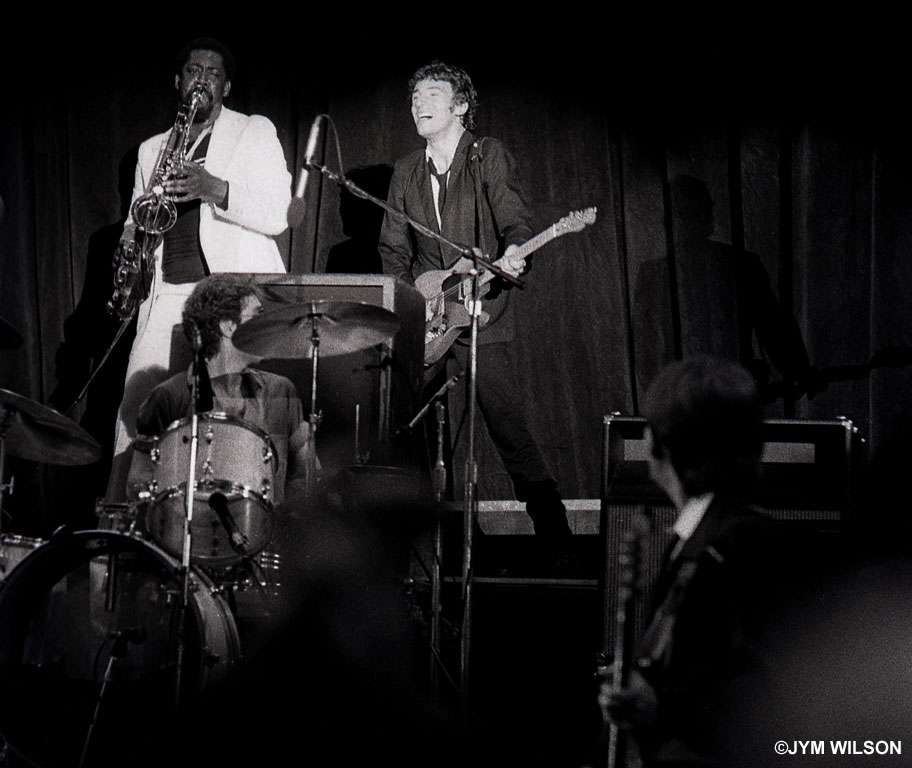 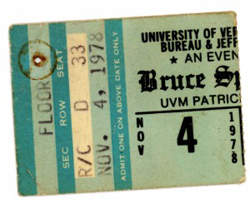 In most ways the show was a blur. I’d shot rock ‘n’ roll before but never anything like this. Bruce seemed to never stop moving. This was more like shooting a basketball game. This was way before auto-focus cameras, let alone digital cards with the capacity of hundreds of photos. At the same time, especially from such a close vantage point, it was as intimate as a small club. The guy was playing right at us. And then he jumped into the crowd and was carried hand-over-hand past me. Total mayhem. I’ve looked at the negatives. Nothing is sharp.

The band played on. Bruce took us down Thunder Road. Told stories about Growing Up. Sent us out into the Night. Danced until Quarter ‘till Three. 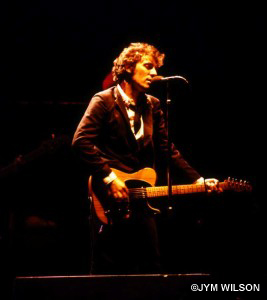 Four nights later I would have an entirely different Bruce experience at the Montreal Forum. This time I was going with four friends packed into a Mazda GLC. No credentials but still carrying a camera and this time color slide film. This one was for me. Bull shit my way past security about not having a press pass. Up, up, up to the seats known as the oxygen section. Lights down. Show starts. Work the color aspect of the show. One friend, actually a pretty crazy casual acquaintance, nudges me, chin tilts towards the stage and says,”let’s go.” And we’re off. Like Bruce jumping the gates at Graceland we will not be denied. Jumping barricades, pushing past security guards, making our way to the front. And then, there we are. Front row. Standing on chairs with dozens of screaming fans. This won’t last. I start shooting fast. Bruce is sitting on top of Roy’s piano. Bang. Danny, Steve and Clarence share a mike. Bang.  Bruce is climbing on top of the speakers and Clarence is tilting his horn up at him. Bang. Security is trying to clear out people who don’t belong, (me,) so it’s finish the roll and scoot so I don’t have to worry about getting tossed from the venue. 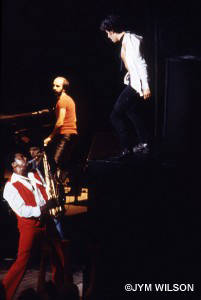 Back to my seat. Enjoy the show.  Make a few more frames, taking advantage of the distance from the stage and the light. 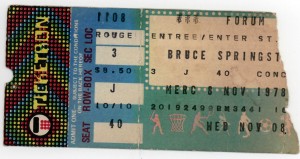 Since the ’78 tour I’ve photographed Bruce in concert one time, in 1999 in DC where I live now. The reunion tour. Great show, good photos. I’ve seen him without my cameras on quite a few other occasions and have a ticket to see him this September, 2012. He always sets a high bar. It’s always fun. Sometimes great. Sometimes transporting. But those ’78 shows changed the way I think about a lot of things. There’s a reason it’s called work. Success takes a lot of it. But if you love what you do sometimes you get to call it playing.

Jym Wilson is the senior photo editor for the Life section at USA TODAY. He lives in Washington DC and is very glad that one of Bruce’s 1978 concerts is available on DVD.

Limited Edition Bruce Springsteen book, The Light in Darkness.
IF you have ever considered buying this book, Now is the time.
The book focuses on Darkness on the Edge of Town, Springsteen’s iconic 4th album
and 1978 concert tour. Read about the live concerts from fans who were there:
- the Agora, Winterland, Roxy, MSG, Capitol Theatre, Boston Music Hall, The Spectrum
and over seventy more, this book is a must have.
With less than 30 copies left, now is the time to order this collectible book.
We are offering savings on Shipping anywhere in the world.
Save Now- Order Here: The Light in Darkness

* The Light in Darkness is not available in stores