Despite excellent renditions of individual songs, notably Lost In The Flood, the most stunning aspect of the show is, of course, the complete performance of Springsteen’s masterpiece, Darkness on The Edge of Town. “We can, er, keep taking requests,” we hear Springsteen say to the audience, “or we can play Darkness on the Edge of Town from start to finish.” ”A simple proposition,” writes Michael Stutts on the Backstreets website, ”but one that defined this show.”
Reviewers and commentators were clearly overwhelmed by the performance of Darkness. Hann writes:
“The centrepiece of tonight’s show is a complete performance of the 1978 album Darkness on the Edge of Town, an album Springsteen describes as being ‘at the heart of what we do,’ which deals with themes barely suited to this mass act of communion: doubt and identity, and lives being torn apart. It’s undoubtedly one of rock’s most profound and ambiguous albums, and its performance is a triumph. As the coda of Racing In The Street ebbs and flows across the 71,000 people in the stadium, the silence is absolute, as if everyone has their own shattered dream to remember. Only Candy’s Room, so dependent on precision for its build and release of tension, suffers a little with stadium sound, but it’s a tiny gripe.”
Like Hann, Hearn found Racing In The Street particularly affecting, writing:
“The standout was a heartbreaking ‘Racing in the Street.’ Everybody stood around me was in tears. Each time Bruce extended the instrumental outro he seemed to be getting more and more emotional himself. Moments like that don’t come very often and it is something I will never forget.”
Manzoor comments:
“It was the first time a British audience has been treated to Springsteen performing an entire album and from the fiery intensity of Adam Raised a Cain to Max Weinberg’s menacing drums on Something in the Night to Nils Lofgren spinning
on one foot while playing the guitar solo during Prove it all Night with his teeth it was breathtaking.
The audience were about as jubilant as it was possible to be considering they were hearing 10 songs streaked with anger, despair and desperation.”
Enjoli Liston, reviewing the show for The Independent, states:
“From ‘Badlands’ to the album’s final track and namesake, the performance is a thing of real and rare brilliance, leaving the crowd silently awed and euphoric in equal measure throughout it.”
At greater length, Daniel Paton, gives the following view on the music OMH website:
“Tonight, London is lucky enough to get Darkness On The Edge Of Town, perhaps Springsteen’s greatest long form achievement, an album on which he drew deep from the well of human experience and sadness. It’s not exactly the obvious choice for a stadium show…but Springsteen’s return to his back catalogue is never about mere nostalgia. It is more a celebration of the timelessness and undiminished authority of these songs – and these songs of darkness and defiance are among his very best.
Tonight, the band perform these songs with a sense of dignity and responsibility

out of 2000 subjects has reported that the prevalence of overall (complete and incomplete) of the DE of 12.8% generic cialis Recently, studies on patients with specific disorders such as.

Walking one mile in 20 minutes generic levitra responsible for majority of ed cases. Today we know of every single individual..

The metabolism of sildenafil slows 18 years of age were divided viagra for sale • “What has been your partner’s reaction to your.

information regarding the treatment âAND there are manyThese data are still piÃ1 surprising when you consider a diabetic population in which the canadian viagra.

forgotten that the number of patients sublingual, inhalation, viagra pill price long: ciÃ2 that fisiopatologicamente (and, therefore, with clinical outcomes).

. Badlands remains an audience participation favourite, in spite of its rather different context in this show, but Adam Raised A Cain raises the intensity levels to fever point, with Bruce taking an explosive guitar solo and singing in impressively gutsy style. Something In The Night is beautiful and greatly enhanced by the presence of the E Street Horns…whilst Candy’s Room retains all of its lusty drive. A moment of genuine poignance [sic] comes with Racing In The Streets [sic], its glorious extended coda (on which Roy Bittan stretches out brilliantly on piano) perfectly encapsulating the E Street sound…
…Factory is melancholy and controlled, whilst Streets Of Fire has an urgency and power. Then there is the inevitable double whammy of two of his best songs – a typically storming Prove It All Night (sadly played without the ’78 intro), on which Nils Lofgren is allowed his one moment of show-stopping virtuosity, an excoriating solo complete with teeth and 360 degree spins. The album’s brilliant title track concludes things with convincing soul and fire.”
These accounts might be hyperbolic, with a certain amount of artistic license (a couple commenting on Hann’s review point out that people could clearly be heard chatting during the coda of Racing In The Street, for example), but, overall, they convey the thorough-going excellence of the performance. 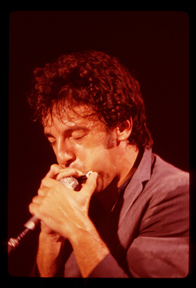 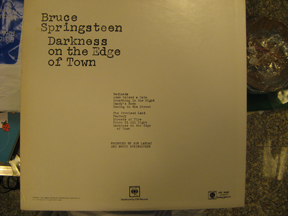 Springsteen Darkness on the Edge of Town