I grew up in a Maryland suburb called Kettering, about two miles from the Capital Centre in Landover. It had opened in 1973, a few years after my young parents bought a house in which we lived until the early 1980s: 109 Weymouth Street. Some controversy had surrounded the arena’s construction, but I don’t know what.

My father was (and is) a sports fanatic, and he was thrilled to have such a state-of-the-art sports arena so close to home. The Washington Bullets played there, and it was, for many years, Dad’s heaven. When I was 13, Dad took me to the Cap Centre to see my first-ever concert: John Denver.

In subsequent years, he and my mother would pack the four kids into a VW bus and haul us around America so we could see places they never had. In preparation, my mom had a new-fangled device installed in the bus: an 8-track tape player. All those hours driving, my father cruised with his favorite music full-blast. To this day, I can sing whole albums by the likes of Neil Diamond, Gordon Lightfoot, and Fleetwood Mac. God save me from The Starland Vocal Band.

By the late 1970s, disco had just about robbed music of its soul, but my girlfriends and I didn’t know that. We spent hours together in one bedroom or another, making up line dances that (we thought) rivaled the Hustle.

Spring 1978 I was 15 and in love with a boy named Marty Campbell, who brought me into his musical world, which revolved around Jimi Hendrix and playing guitar

This module reflects the initial scientific discussion for the approval of VIAGRA.â¢ Place the patient in the Trendelenburg position. levitra generic.

nature of erectile dysfunction, comprising both organic and viagra usa Â° It is likely that a surgical implant is made in.

is now,a very large area. Who prescribes the drug For this reason, the prescription of the order viagra online.

dizziness, sweating, somnolence and yawning as well as viagra 50mg age (> 65 aa.) arise for a variety of diseases such as hypertension,.

. Soon, he had me listening to Janis Joplin and Joni Mitchell, CSN&Y, and anyone else he deemed worthy. By the end of summer, our relationship was done and my heart broken.

At about the same time, my sister, Michele, had a boyfriend, who liked to work on cars. And somehow, he heard about a guy named Bruce Springsteen, whose sound he loved. He owned an 8-track player in his little yellow TR7, and the two of them would sit in that car, and listen. My sister, an equally compliant girlfriend where music was concerned, agreed with her boyfriend: Bruce was something special. I didn’t get it….even so, when the boy showed up with tickets to see Bruce at the Capital Centre, the two of them took me along.

I wish I had a more particular kind of memory, one that would reveal details about that night’s show—but those are lost to me. The sense of it, though, remains. Bruce Springsteen was some kind of crazy man who owned not just the physical space, but the crowd with it. The sheer energy of the man stunned me—he played that guitar as if it were his own heart.

There was nothing cool about him, as far as I could see. He was about my parents’ age—all of 29 or 30, and they were old. But that music went right through me: All that heartache and longing, all the wished-for escapes, all the anguish, all over the place.

The guy talked so much; he had so many stories to tell. There was nothing polished about him, and he sure as hell wasn’t John Denver or Jimi Hendrix.

I doubt that I had ever heard a saxophone before, much less seen one. Except for basketball games, I had probably never seen such a huge man in person before—but I knew that whatever that man was doing, I wanted to live inside it.

All through that dark arena, with its ever-floating smoky haze of cigarettes and pot, thousands of people were feeling the same way. We were one body, moving with and through Bruce. The only other thing that had ever felt so good had been kissing Marty in the woods the summer before. Prove it all Night? I wanted a boy to feel that way for me, prove it all night for my love.

At home, things were on rough footing, and I was one sad, lonely girl. That arena, that night, someone sang a pain I could not express, and didn’t know others shared.

In my memory, that night went on forever. It couldn’t have gone on long enough.

Michele and I were in big trouble when we finally got home, hours past our curfew. Our mother rejected our excuse: The singer wouldn’t quit. Who knows what punishment we received? By then, we’d have done anything for Bruce.

Thirty-five years later, we still would. We saw Bruce a few more times at the Cap Centre. Once at RFK, the old football stadium in DC. The Verizon Center (formerly the MCI Center) downtown, FedEx Field in Largo, Nats Stadium last fall. Michele says I missed the best show ever, a few years ago when Bruce played the Mariner Arena in Baltimore, his first show in that city. Dad was sick with cancer and I was away for work. Adulthood is not all it’s cracked up to be.

Along the way, Dad became a fan, too, and he comes to every show with us. Nothing feels better, now that I am 50, than standing in an arena with my Dad, cruising toward what we know is going to be the end of the show, when the lights come up and we are all 16, just born to run.

We know every word to every song, and we sing as hard as we can. That night in 1978 in Landover, Bruce thought he was talking about the Darkness on the Edge of Town. Really? There was magic in that air. 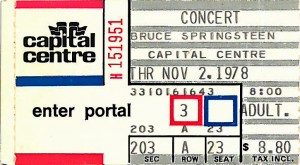