If you’re anything like me, it’s never too late to start thinking about holiday gift shopping. Let’s face it, it’s just easier continuing to sit here, watching football, hockey, basketball, tweeting, checking your FB page… But gifts must be got at some point, and if there’s a Springsteen fan on your list, you could do a lot worse than any of the items listed below:

By far, the most anticipated holiday offering this season is the Ties that Bind, The River Collection,
Bruce Springsteen Box Set. 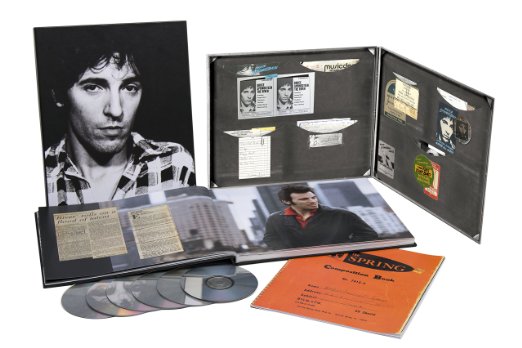 Here is what the box includes:

THE MUSIC:
The audio pieces are The River album + the original The River: Single Album, which was what producer, Jon Landau initially delivered to Columbia before Bruce went back and recorded further material. The River, Springsteen’s fifth album, was released on October 17, 1980 as a double album and reached 1 on the U.S. Billboard 200 chart. The River: Single Album is the 10-track album that Springsteen recorded in 1979 as a follow up to 1978s Darkness On The Edge Of Town but never released. In addition, the package also includes a 22-track CD of audio outtakes from the recording sessions including 12 previously unreleased songs.

THE VISUALS:
The visual aspect of the box set includes a 60 minute documentary (more info below), a live concert from The River Tour and in-studio rehearsal footage. Additionally, there is a beautiful book accompaniment that features 200 never-seen-before photographs documenting the making of the album with captions from Bruce in his handwriting. There is a lyric book addition to the unreleased tracks of the Outtakes Album plus “Cindy,” an unreleased track from The River: Single Album. The lyric book will also include a new essay written by famous music writer, Mikal Gilmore.

THE DOCUMENTARY:
The Ties That Bind is a brand new 60-minute documentary produced and directed by Thom Zimny. The documentary features an intimate interview with Springsteen as he reflects on the tumultuous, extended period writing and recording The River. The film transitions between Springsteen telling the stories behind the music — and illustrating them with solo acoustic guitar performances — interspersed with period concert footage and rare photos of Bruce and the band in and out of the studio.

As usual, Bruce Springsteen is not among the confirmed acts. But keep in mind that he has performed at the main Light of Day concert in 12 of the last 15 years.
This year’s main concert takes place Jan. 16, 2016 at Asbury Park’s Paramount Theatre. Here is a partial schedule, with lineups for individual shows to be confirmed.
For complete information, visit Lightofday.org or ticketmaster.com. 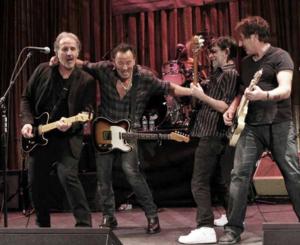 JAN. 17
“Songwriters by the Sea Boardwalk Crawl” at Watermark, Langosta Lounge and Tim McLoone’s Supper Club.
“Kids’ Rock” at Stone Pony.
“Musicians on a Mission,” noon at The Saint.
“Last Note,” 7:30 p.m. at The Saint.

The Light in Darkness, Lawrence Kirsch’s collection of Springsteen fan stories and amazing photos from the 1978 Darkness tour, has less than 35 copies left available in its limited edition. Lawrence’s previous Springsteen book, For You Original Stories and Photographs by Bruce Springsteen’s Legendary Fans, is sold out. 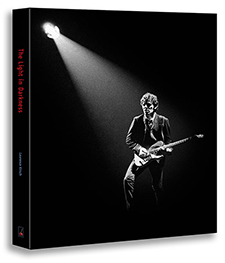 “You might not know where to begin to get the perfect gift for the Springsteen fan in your life. You cannot do better than The Light in Darkness book”. ~ David Lifton  UltimateClassicRock.com

Save on Shipping Now, Available only Online Here: The Light in Darkness

Bruce Springsteen & The E Street Band 1975 – Treasure trove of BTR-era photos
The photography of Barbara Pyle is already familiar to many Springsteen fans and Backstreets readers: you’ve seen her images in both the 1989 and 1992 editions of the Backstreets books, in Talk About a Dream, and certainly, thanks to her kindness and love for the Big Man, all over the Clarence Clemons tribute issue.
But you’ve never seen this much of it. Packed with more than 150 color and black-and-white photographs, many of them never published, Bruce Springsteen and the E Street Band 1975 is a jewel of a hardback celebrating the 40th of anniversary of Born to Run. Order your copy from Backstreets.com

And of course we recommend Peter Chianca’s Glory Days: Springsteen’s Greatest Albums — granted it’s hard to wrap because it’s an eBook, but you can always get it as a treat for yourself, a steal at only $2.30 on Amazon!

Christopher Phillips is the editor of Backstreets magazine and web master of go-to fansite Backstreets.com, and his collaborator Louis P. Masur is an American Studies professor at Rutgers, NJ and author of Runaway Dream, one of the best of the recent slew of Springsteen books.

Talk About A Dream, their collection of interviews with Bruce Springsteen draws from his four-decade career. Most of Talk’s 428 pages contain material unique to the volume, all of it revealing, much of it absolutely essential. You don’t have to get further than page 30 for evidence: That’s where you’ll find “The Lost Interviews” from 1975, a series of sit-downs with European press that were locked in a vault for years; they were excerpted in Backstreets magazine in the ‘90s but never published in full, until now.It’s a loss that needed to be rectified: Catching Springsteen on the cusp of his first major success, it cements themes and attitudes he would go back to again and again during his career. Using primarily Springsteen’s own words pays big dividends, and not just because fans will be able to hear his Jersey cadences and full-throated laugh in their heads as they go. He’s remarkably open and thoughtful, and you can see him gradually building and shaping the themes and concerns that have marked his career: his responsibility to the audience, the forces that drive his writing — from the psychological to the sociological — and the fact that he takes his job deadly seriously, no matter how much fun it is.

You can’t go wrong with a Springsteen painting. Or maybe you can. But we prefer photographic imagery for our walls, visit RoccosPhototavern.com, featuring some of the best Bruce Springsteen concert shots this side of the Mississippi. And be sure to say hello to Rocco for us.

An on line store featuring hand crafted wristbands, Brucelets, necklaces and key chains made special by adding a date of your choice. And new at BruceBuds, fantastic pewter wristbands available in various crystals, colours and sizes. 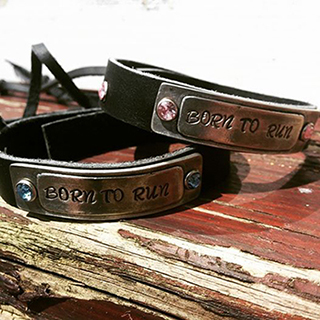 These beautiful leather cuffs are embellished with either Brucebuds, Born To Run or E Street Nation. And if that is not enough, discover the BruceBuds Pin Badge Bundle:Pin 1: Round standard pin badge with a diameter of 32mm with the Brucebuds “Born To Run” logo. Pin 2: hand made Pewter “The Boss” Pin badge with two fixings – See the whole range at: BruceBuds. 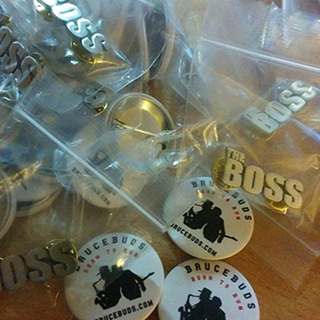 From the Emily McDowell Studio.

Not technically a Bruce item, but it works, n’est pas?

• ‘One Night In 1978’ is a limited photo edition of 50 box sets and 2 artist’s proofs.
• Each contains six (6) different – 9”x12”, 310 gsm archival prints, signed and numbered
• They are made from high resolution scans of the original film negatives.
• Four of the six photographs were recently discovered files.
• The cloth covered box is hand made specifically for this edition by Samantha Couture of Fly Leaf Bindery. 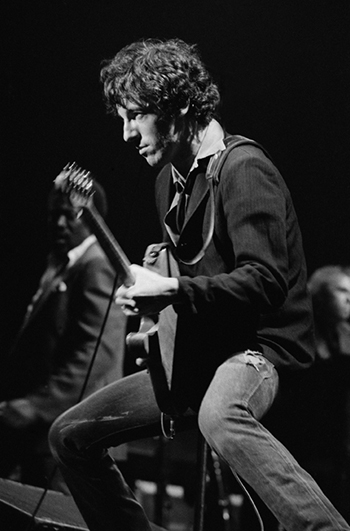 Good luck everyone and Happy Shopping!