It all started on November 27, 1980
Thanksgiving night.
My best friend and I were bored so we decided to take a train from New Hyde Park in Long Island to New York to see Bruce Springsteen & The E Street Band at Madison Square Garden for one his River tour concerts.
We only had $35 between us but figured that should be enough to get us two tickets. Boy were we wrong! The prices were high and the scalpers laughed at our low offers. Finally the show started and we weren’t in, YET… So we figured one more walk around The Garden and then we’d head on home. Just as we were about to give up a scalper agreed to sell us 2 lodge seats for $35.
Not a favor, more like the scalper thought they were now worthless.
We raced in like we just got tix via a Willy Wonka candy bar. Big smiles, and we ran up the escalators. A few security guards yelled “slow down!” But we keep on going.
We had great seats, first level by the stage. Bruce & The E St Band were amazing. We stood on our seats, danced and during the quiet songs sat on the edge of our seats. It was fun and sad to hear Bruce speak about the memories of his father. The worst was pouring his heart out about his dad disliking him. It seemed to us that most fans did not feel his sadness. Many cheered as Bruce shed a few tears.
The rest of the show was upbeat, a bit preachy and a religious experience.
A down right addictive drug!
When the show finally ended we swore we would be back the next night and escape life for 3 more hours with reverend Bruce.  Before the November 28th show my art major friend decided she could copy a Bruce Springsteen Tour ‘Working Pass’ so we would definitely be at both shows in December. We kept stopping MSG arena personnel to get a closer look out their pass so she could make us our own. 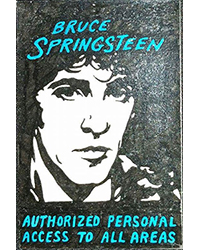 They came out great! The hardest part would be getting in. So, on December 18, my fellow Bruce tramp and I get on line at the VIP guest door. In front of us are David Lee Roth and his date. It was exciting and very nerve racking.
We approach a lady with a clipboard and she asks, “Who gave you those passes?” Shaking in my boots I blurt out “My dad is the president of IBM!” She waved us in and we shared the elevator ride with David Lee Roth and his friend. That in itself was exciting beyond words to me as I am a major Van Halen fan!
Then the elevator stops and the doors open. We went straight to the seating area and walked around the Garden.

I believe we sat in the guest seats for half of the show and then walked backstage without being questioned by anyone. I noticed a tent area and behind a bar was Keith Richards. I was fine to stay put there. My friend made a beeline straight to the restricted area for band members only. We did see Bruce drying his head with a towel and go into his dressing room. Just then we were caught! Security was called and over the P.A. we heard repeated a few times “I need back up to escort two out of the building.” It was a total walk of shame.
Strange thing was as we were being escorted out, promoter Bill Graham was standing right there and invited us back in. I recognized him from being a big  Grateful Dead fan. It was a total pinch me I’m dreaming moment. So there we are back in the guest section to enjoy the rest of the show.  What a thrilling way to end an incredible evening.
I’ve seen Bruce and the E Street Band many more times and paid for every single ticket.

I’m still a huge  Bruce Springsteen fan and have my own fan group called “Boss Talk” on Facebook and Twitter.
To quote Bruce, “Show a little faith, there’s magic in the night”
Thank you Bruce!

Limited Edition Bruce Springsteen book, The Light in Darkness.
IF you have ever considered buying this book, Now is the time.
The book focuses on Darkness on the Edge of Town, Springsteen’s iconic 4th album and 1978 concert tour. Read about the live concerts from fans who were there – the Agora, Winterland, Roxy, MSG, Capitol Theatre, Boston Music Hall, The Spectrum and over seventy more, this book is a must have.
With less than 20 copies left, now is the time to order this collectible book.
We are offering savings on Shipping anywhere in the world.
Save Now- Order Here: The Light in Darkness