When I first heard “Born to Run” on the radio, I knew immediately I had discovered something special. I was obsessed.

I knew immediately I had discovered something special. I was obsessed.

When I first heard “Born to Run” on the radio, I knew immediately I had discovered something special. It was 1975, and I was 13 years old and couldn’t wait to buy the album and commit every word to memory. I was obsessed and quickly owned not only Born to Run but soon Greetings from Asbury Park, NJ and The Wild, the Innocent, and the E Street Shuffle. At that point, as owner of all three Bruce Springsteen albums, when some of my peers didn’t own any, I felt I could definitely consider myself a serious fan.

After the long drought that followed, I was excited to hear what Darkness on the Edge of Town was all about and immediately loved “Prove It All Night” which was on rotation on my favorite AOR station in Rochester, WCMF. I was especially excited when I heard Bruce would be playing at the War Memorial (now the Blue Cross Arena) in August of that year. I asked my best friend and partner-in-crime Andrea Willis if she wanted to go, and she declined. (I believe she has since seen the error of her ways!) So I asked her brother Michael, one year older, if he’d like to go, and he quickly said yes. Tickets were purchased (at the princely sum of $6.50) and plans were made for that fateful night. We had tickets for the floor—this was long before the current lottery system which meant we could not only pay to be on the floor but have chairs to boot.

When the evening finally arrived, Michael picked me up around 7, and on our ride we fantasized about what the show would be. We assumed there would be an opening act, though none was announced, and hoped against hope that it might be Patti Smith. Needless to say, when Bruce took the stage shortly after 8, we realized it was all Bruce, all night. We adapted to that pretty quickly.

In some ways, the night is a blur. He opened with “Summertime Blues” which surprised me because I was expecting something from Darkness (which I had yet to purchase). But it was high energy and quickly introduced us to what Bruce concert veterans already knew: there was no one like the Boss live in concert. One song after another, Bruce jumped and slid across the stage in ways I never imagined. The E Street Band, which I feel I underrated before seeing them live, were clearly more than a good backup band, and Clarence, of course, completely stole my heart.

One moment from the show has always stuck with me. While we had chairs, we seldom used them, standing through most of the show. It felt impossible then to sit when Bruce and the boys were working so hard. At one point, I noticed people standing on their chairs, but I knew Michael was a fairly restrained sort and was reluctant to go overboard until one point when I turned to exclaim to him about something and realized I was looking at his knees. He was already standing on his chair so I felt liberated to do the same. The spirit of Bruce compelled us!

Sometime around 10 Bruce left the stage, promising to return shortly. An intermission? At a rock concert? I’d never…it seemed weird, but I figured this meant we were really going to get our money’s worth (again, a princely $6.50) out of the night. Maybe 20 minutes later, after we’d had time to catch our breath (we may have needed the break more than they did), Bruce returned for another hour-plus, completely blowing away any previous concert experience I’d ever had. But the night was not over—not by a longshot.

After the show “ended,” everyone knew at least one encore was coming because he hadn’t done “Born to Run” yet, and of course they all returned to the stage for a couple more songs. But still, no “Born to Run” so we all clapped mightily until he came back for a couple more songs, closing with “Born to Run.” At that point, as he left the stage, the arena lights came up and people began filing out. But some of us were greedy and moved closer to the stage, filling spots vacated by the casual fans. We applauded loudly until they returned, to a fully lit venue, for a third encore. After that, still more left the building but some of us continued to scream for more, and he delivered – an amazing fourth encore, still performed with the arena fully lit. It was a remarkable thing, and I always pity those who left too soon. The rest of us had ourselves quite a party. When it was over, we looked at the clock: 11:45.

We hardly knew what to do with ourselves. Michael and I were both somewhat delirious from what we’d just experienced and didn’t want it to end. We both kept laughing giddily, though it’s hard to know why. We hovered outside the War Memorial for awhile in the impossible hope that Bruce was going to suddenly emerge from a door somewhere, but it never happened so we finally knew to call it a night.

The next morning, I left on a trip to Pittsburgh to visit my father for a few days before I began my senior year in high school. (Michael left for college shortly after that, too.) I told my dad that I needed to pick up a record so we stopped at the Listening Post so I could finally buy Darkness on the Edge of Town. The following day, after he left for work, I put the album on my father’s turntable and listened repeatedly. He called sometime around lunch and asked how I was doing. “I have just had a religious experience,” I told him. And that’s when I knew that being a Bruce “fan” meant much more than just having all of his albums. 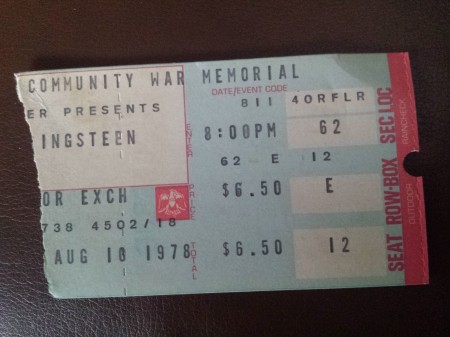 Limited Edition Bruce Springsteen book, The Light in Darkness.
IF you have ever considered buying this book, Now is the time.The book focuses on Darkness on the Edge of Town, Springsteen’s iconic 4th album and 1978 concert tour. Read about the live concerts from fans who were there – the Agora, Winterland, Roxy, MSG, Capitol Theatre, Boston Music Hall, The Spectrum, Shea’s in Buffalo and over seventy more, this book is a must have.
With less than 20 copies left, now is the time to order this collectible book.
We are offering savings on Shipping anywhere in the world.
Save Now- Order Here: The Light in Darkness