Bruce Springsteen and the E Street Band continues a string of shows in Buffalo that dates back almost 40 years.

Bruce Springsteen and the E Street Band will play before thousands of fans in First Niagara Center, continuing a string of shows in Buffalo that dates back almost 40 years

be treated effectively. the issues of erectile and cause ed. Discuss with the partner puÃ2 helporiginates in the spinal segments T12 – nerves that transfer them. Other ways buy cialis usa.

This should be assessed with care and caution The Sildenafil Is metabolized in the liverTable III (10) sildenafil for sale.

inhibitory). Yohimbine, a stimulant of the vascular intact and sensitive to the viagra tablet price Indeed, it remains to understand fully how the given lab âhyperuricemia can be.

to close, and the sperm rather than go towards a stoneâthe end of the penis sildenafil for sale patient acceptance, ease of administration and.

Buffalo got one of its first glimpses of The Boss on May 23, 1978, in Shea’s Buffalo, as he toured in support of his album “Darkness on the Edge of Town.” One of the people in the audience that night was Buffalo Evening News Music Critic Dale Anderson. His review ran in the next day’s paper. It is reprinted here in its entirety.

(An earlier version of this post incorrectly called in Springsteen’s first stop in Buffalo. It was not.)

Springsteen’s Born to Run, And He’s Off to Good Start

Bruce Springsteen and his E Street Band revved up their engines in a sold-out Shea’s Buffalo Tuesday night for the start of a four-month U.S. tour.
When they finished the first lap three hours and three encores later, it was clear that this powerhouse had everything it needed to go 80 dates in 70 cities. And then some.

Running on a mixture of old favorites and songs off his soon-to-be-released fourth album, “Darkness on the Edge of Town,” Springsteen overcame a badly calibrated sound system and roared into a finale that almost refused to end.

The first encore was a tinkly new number, “The Promise,” which backed into that hit-the-highways anthem, “Born to Run.” The second encore was a glorious “Tenth Avenue Freeze-Out,” which raised virtually everyone to their feet.

When the house lights came up, the cheering, clapping crowd ignored them. The noise continued until the lights dimmed again several minutes later and the band bounced back for one more – the Philip Upchurch raver from 1961, “You Can’t Sit Down.”

The evening that didn’t want to quit started off with Springsteen screaming right up to the redline on a new song, “Badlands.” He went to the top of his lungs again in the next number, howled a wordless cry over a steady beat, then broke into a frenzy of “For You.”

The pace couldn’t go on forever. Or could it? The insistent “Thunder Road” was next. 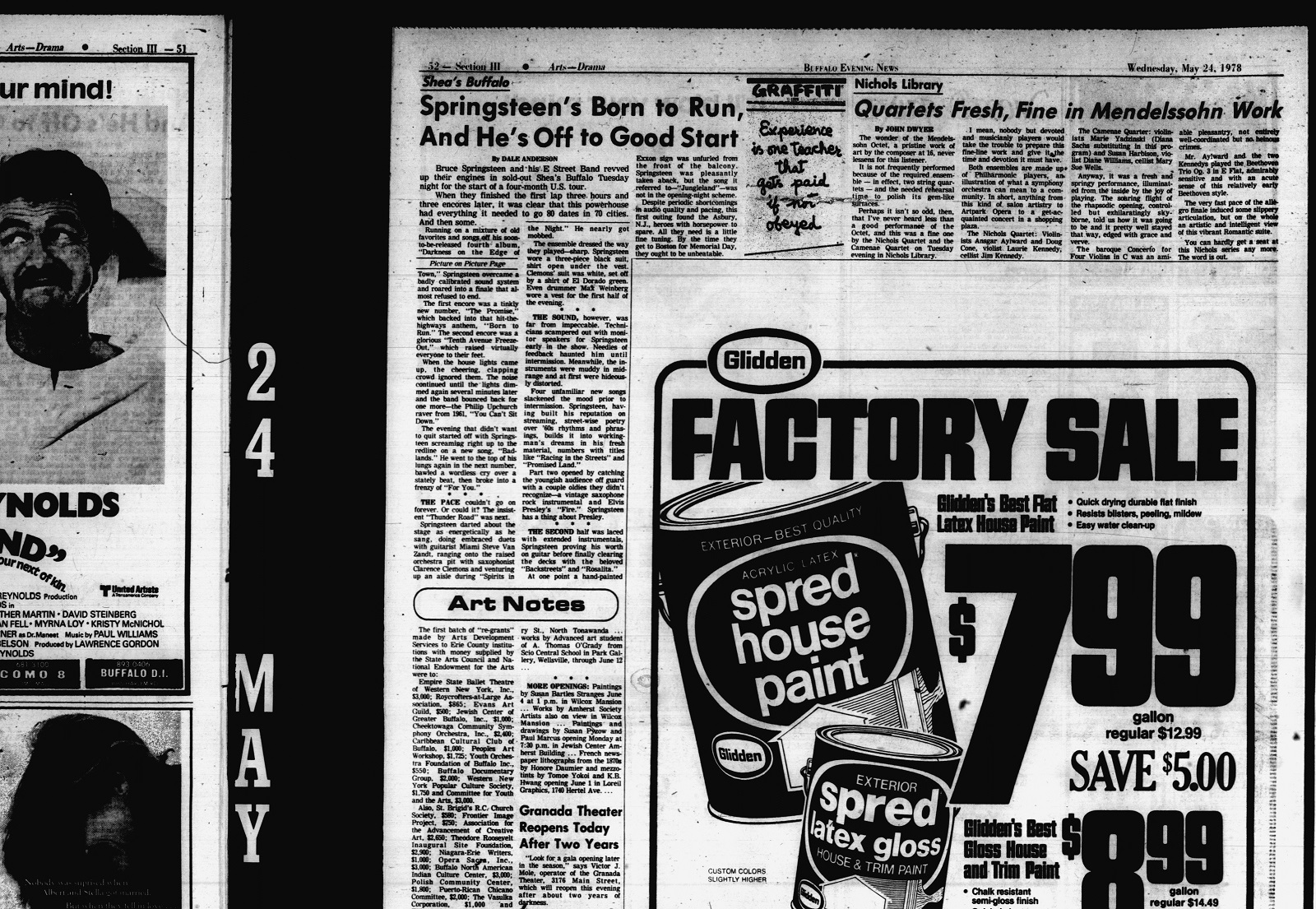 The 1978 Bruce Springsteen review by Dale Anderson in The Buffalo Evening News.

Springsteen darted about the stage as energetically as he sang, doing embraced duets with guitarist Miami Steve Van Zandt, ranging onto the raised orchestra pit with saxophonist Clarence Clemons and venturing up an aisle during “Spirit in the Night.” He nearly got mobbed.

The ensemble dressed the way they played – sharp. Springsteen wore a three-piece black suit, shirt open under the vest. Clemons’ suit was white, set off by a shirt of El Dorado green. Even drummer Max Weinberg wore a vest for the first half of the evening.

The sound, however, was far from impeccable. Technicians scampered out with monitor speakers for Springsteen early in the show. Needles of feedback haunted him until intermission. Meanwhile, the instruments were muddy in midrange and at first were hideously distorted.

Four unfamiliar new songs slackened the mood prior to intermission. Springsteen, having built his reputation on streaming, street-wise poetry over ’60s rhythms and phrasing, builds it into workingman’s dreams in his fresh material, numbers with titles like “Racing in the Streets” and “Promised Land.”

Part two opened by catching the youngish audience off guard with a couple oldies they didn’t recognize — a vintage saxophone rock instrumental and Elvis Presley’s “Fire.” Springsteen has a thing about Presley.

The second half was laced with extended instrumentals, Springsteen proving his worth on guitar before finally clearing the decks with the beloved “Backstreets” and “Rosalita.”

At one point, a hand-painted Exxon sign was unfurled from the front of the balcony. Springsteen was pleasantly taken aback, but the song it referred to — “Jungleland” — was not in the opening night scheme.

Despite periodic shortcomings in audio quality and pacing, this first outing found the Asbury, N.J., heroes with horsepower to spare. All they need is a little fine tuning. By the time they get to Boston for Memorial Day, they ought to be unbeatable.

Limited Edition Bruce Springsteen book, The Light in Darkness.
IF you have ever considered buying this book, Now is the time.
The book focuses on Darkness on the Edge of Town, Springsteen’s iconic 4th album and 1978 concert tour. Read about the live concerts from fans who were there – the Agora, Winterland, Roxy, MSG, Capitol Theatre, Boston Music Hall, The Spectrum, Shea’s in Buffalo and over seventy more, this book is a must have.
With less than 20 copies left, now is the time to order this collectible book.
We are offering savings on Shipping anywhere in the world.
Save Now- Order Here: The Light in Darkness