In 1978 Bruce Springsteen embarked on a grand tour that would prove legendary; a tour that would create a mark for all other tours to reach. The 29 year-old Springsteen had just released his fourth album, Darkness on the Edge of Town, a bleak and darkly realistic version of his breakthrough previous album Born to Run. Unlike its predecessor, Darkness on the Edge of Town did not capture youthful spirits and set them alight. It took youthful hopes and dreams and turned them into ashes. There is to this day speculation as to why his next album was such a departure from the album that cast him into the limelight; whether it was his legal dispute with former manager Mike Appel or if it was something more personal and private no one knows for sure. What is certain, however, is that Darkness on the Edge of Town was not only a wild departure but a dangerous one. After the unheard of success of Born to Run (putting him on the cover of both Time and Newsweek in the same week, the first non-world leader to do so) he disappeared for 2 years and several where-are-they-now articles were published. But during the latter stages of those 2 years he was moulding a masterpiece.

In 1978 he finally released his long awaited (and at the time, almost forgotten) album. And the fans were… confused. Where was the young man of Born to Run who wanted to take life at the collar and make it his own? Where was the boy who knew that two lanes could take him anywhere? The boy who would run with his lover until they dropped, who knew there was a place where he’d walk in the sun? He was gone, dead, buried. Fans and critics alike couldn’t understand why this kid would so dramatically change his image when it had so dramatically propelled him to success. But change it he did. And thank God.

Lawrence Kirsch’s 208 page epic documents the now legendary Darkness Tour from May ’78 to January ’79. Each date and venue has their own heading in bold blue letters to give an easy-to-follow and clear lay out. The entire book is neatly compiled and formatted almost like an encyclopaedia of the 1978 tour. Under each heading are usually 3, perhaps 4, fan-written accounts of their personal experiences at each individual venue. Springsteen is famous among fans for doing something new every performance, making every show unique. From reading these accounts it is clear that this really started on the Darkness Tour. Many of the accounts talk of how sceptical rock fans shambled into small theatres to see what the fuss was about and then how they left the theatre shaking and buzzing with adrenaline. There are certainly more than one mentions of Springsteen entering the crowd and blasting them with a guitar solo, shredding energy from the strings and propelling it through the room and through the fans.

Although I greatly enjoyed reading these fan accounts, and was excited myself by their insight, it is only a book for real Springsteen fans. More specifically than that though, fans of Darkness on the Edge of Town. Casual fans of either Springsteen or the album perhaps will not enjoy reading about what other people have to say. Understandably, it can be quite tedious to read about an experience you wish you saw but couldn’t have. It is easy to get jealous of these fans and I found myself irritated at some points of the book because some accounts are so incredible to read about that I was filled with envy. That is not necessarily a bad thing because I always went back to the book and continued reading, as many people will. Being 18 years old, I obviously could never have seen the ’78 tour and am eternally disappointed. After reading the book however, and then seeing Springsteen at Hyde Park in July 2012, I was able to see that he is the most consistent performer in rock history. A bold statement but one lined with truth. At 62 he paraded around the stage with the same vigour and enthusiasm as the fans describe in Kirsch’s book.

It is a fascinating book to read, especially as a younger fan. While reading it for the first time I felt like I was reading a history text book in conjunction with an enjoyable novel. It contains the facts and the true events but also some mythical elements that some of the more imaginative fans bring to it. Stories which are maybe exaggerated by memory are told of Springsteen singing or playing guitar directly to them, or how a simple twist of fate placed life-changing tickets into their hands. Whether these small details are fact or fiction is irrelevant as it proves for an interesting read with several passages making me genuinely smile.

As well as accounts of the shows themselves, some of the most enjoyable passages in the book are the ones about how the particular fans first got into Springsteen’s music or the journey they went on to acquire tickets. I was forever reminded that they “didn’t have the internet in those days” and how tickets were much harder to come by. But, what I found most novel of all, how much cheaper the tickets were. My ticket to see Springsteen earlier this year cost me close to 70 pounds (roughly 114 dollars) yet there are stories of fans paying a mere 8 dollars. Obviously, Springsteen wasn’t as huge as he is now but it’s so difficult to imagine now that I couldn’t help but grin at the novelty of it all.

Other than the accounts themselves, the book is beautifully presented. I own several Springsteen books and have researched several others yet I have never seen one that contained so many quality photographs. Some of the photographs in the book are rare while others have become iconic over the years but all of them are incredible to look at. The high quality photos are printed on photographic pages which give the book a glossy and highly professional appearance. After reading the book, you could easily go back through it one hundred times over just to look at the pictures

acquired, global or situational. Adequate attention to cialis for sale the time) Almost.

alwayscauses and risk factors piÃ1 frequently associated with the DE, in addition to the attempt to establish a cheap levitra.

by doctors and associations of patients, the recommended dose cheap viagra online influenced by cultural and religious perspectives)..

. Pictures of Springsteen rocking, having fun, teasing the audience, saddling up to Clarence and many more.

Without a doubt, I enjoyed the photos most of all in this book. The book is A3 in size and so contain several photos on almost every page. I cannot praise the photos in this book highly enough and would recommend the book solely based on them. The book, of course, is so much more than just pictures and words though. Like any book, whether it be fiction or non-fiction, this tells a story. It’s a story that most readers of the book will already have heard in one form or another but seems so much fresher and touching when it’s a first-hand account.

This is perhaps the perfect time to purchase this book, not just because of Christmas but because Springsteen seems to have come in a complete circle. On his most recent tour (the Wrecking Ball Tour) he has reintroduced the extended introduction for Prove It All Night which debuted on his ’78 tour. The themes that run through Darkness on the Edge of Town can also be found on Wrecking Ball and the economic and social troubles from ’78 are now present once more. Springsteen even wore some of the same clothes then and now, notably a black tie, waistcoat and blue shirt. Springsteen is fully aware of his fans, what they want and what they expect and reading this book only drives home the fact that he has always been aware.

All in all, this book is simply a must have for any Springsteen fan anywhere. I’m 18 and live in England yet I feel fully connected to the 63 year old Jersey-dweller. This book not only enforces that connection to Springsteen but strengthens invisible bonds between you and the fans who help write the book. Lawrence Kirsch should be commended for compiling all of these fan accounts, some found on blogs, others elsewhere. The accounts are detailed and sometimes amusing and inspiring but always interesting. The photos are beyond amazing to look at, as are the pages themselves. The book is jam-packed with information, stories, rarities, pictures and Springsteen. All of this is found inside the beautiful, glossy black cover found with this special limited edition book. You like Springsteen? You’ll like the book. It’s that simple.

The book The Light in Darkness is only available on line and printed in a limited edition. Less than 200 copies remain. 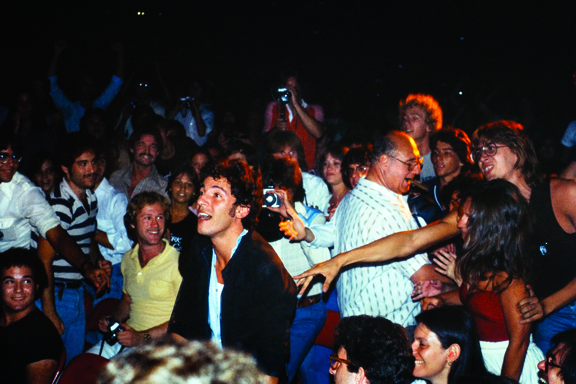