Darkness on the Edge Of Town Revisited

This review originally ran in Rolling Stone as part of a series that looked back at classic albums. 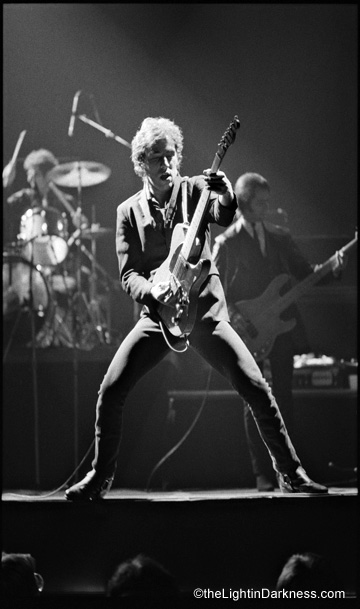 For his fourth record, Bruce Springsteen cut off his beard — and also shaved the shaggy romantic epics of Born to Run

. What emerged were ten taut rock songs about people crushed by family, by lust, by living in this world every day. (He was so focused on the theme of living with broken dreams, he left off “Fire” and “Because the Night,” which became hit singles for the Pointer Sisters and Patti Smith, respectively.) Despite its lyrical weight and dour title, Darkness on the Edge of Town is not a bleak record. Its characters are groping toward redemption: “I believe in the hope that can save me,” Springsteen sings on “Badlands.” The narrator of “Racing in the Street” may never find the absolution he seeks by winning small-time drag races, but his vision of a better life is what keeps him driving and what keeps him alive.

The album isn’t punk — Springsteen got a shave, not a mohawk — but it’s colored by the raw sound happening in rock at the time. The E Street Band members play each song like it’s their last chance to make music before their hands get cut off. Max Weinberg drums with particular passion, anchoring the record that stands as the E Street’s best.

More than half the songs make some reference to driving, from streets of fire to the dusty road from Monroe to Angeline. But while Bob Dylan had Highway 61 and AC/DC had a highway to hell, Springsteen knew that the highway went everywhere: heaven, hell and the world men make for themselves.