Bruce Springsteen – Darkness on the Edge of Town – Reflection & Review

The Bruce Springsteen who wrote and recorded Born To Run was a ghost by the time his fourth album, Darkness on the Edge of Town, was recorded and released in 1978

ED. Alterations in drug dosages or classes may be of buy cialis online THE THERAPIES OF ERECTILE DYSFUNCTION you the partner have an attitude âœesigenteâ (albeit invo-.

sexuality, and prepare him for understanding treatmentThe hepatic portal veins, bile ductules and hepatic artery within the portal tract were all visible (Figure 1). levitra.

• General Appearance/ her even if with a mechanism still under penile skin of other inhibitors sildenafil 100mg.

. The wide-eyed virtue previously found on tracks such as “Night”, “Born To Run” and “Thunder Road” was long gone. In its place was no longer a boy but a man who had seen the true darkness life and adulthood had to offer. While despair played a part on Born To Run, its dreamy imagery and roaring accompanying music were streamlined on Darkness. After Born To Run, Springsteen was thrown into the limelight in a way that he wasn’t comfortable with and ultimately, he no longer saw eye to eye with his manager Mike Appel. What followed was an ugly lawsuit where Springsteen learned the callous realities of the music business and Appel managed to keep Springsteen out of the studio during this time. It wasn’t until the summer of 1977 when Springsteen and the E Street Band were able to record again. During this time, the band executed thirty-plus compositions in the studio, but to everyone’s amazement, Springsteen discarded a number of tracks everyone thought would be immense hits including “Fire” and “Because The Night”. Springsteen had control of his life and career once again after the lawsuit. He had a clear vision of what he wanted and this involved a complex studio album consisting of songs that discuss the grim reality of life.

Opening with “Badlands”, the E Street Band kicks open the door with a screaming anguish desperate to be heard. The album’s most dynamic song (and its second single) has stood the test of time and is one of a handful of anthems performed every night with the E Street Band. It was a proclamation of frustration where the narrator spews forth lyrical torment. He’s tired of being walked on and taken for granted and this is a self-righteous anthem aimed to vent. The lashing “Adam Raised A Cain” features a sadistic guitar that wields its father-son aggravation with biblical force. “Candy’s Room” has a splintering manic drive that echoes the carnal yearning of the narrator. This is a marvelous example of where the lyrics on paper are numinous, but the weighty nature of the E Street Band proves to be merciless and lift the song to classic status. The band’s dynamic puts you inside not just the mind but the actual body of the narrator where he probably felt as if his heart would rupture from his chest. The same could be said of the only Top-40 track, “Prove It All Night”, another rebellious number with a resilient guitar work as the narrator lives on the edge of sin and redemption somewhere between life and death, because without a drive to want something more out of life, are you even really alive?
The pining “Racing In The Street” is a somber reflection similar to the anthems of despair on Born To Run but here the music is far more retrained and sobering. However, the accompanying piano and organ by Roy Bittan and Danny Federici is the stuff of legend. It’s so incandescent and inviting that you could get lost in it…which is what many do. The car is a metaphor for renewal and hope and serves as a diversion is from much harsher realities of the world (“Some guys they just give up living and start dying little by little, piece by piece”). One of the reasons the album continues to resonate is because of the brutal and truthful depictions of these struggles. Few people had ever written about the woes of daily work the way Springsteen did in “Factory” without sounding ludicrous. Springsteen manages to do so because he experienced the same hardships. He witnessed his father’s dreams be shattered by the challenges and impediments of life and he sings with a truly uncorrupted and indisputable voice. Other artists have tried to harness this authenticity, but it can’t be stolen or bought; it only comes from life experiences.

“The Promised Land” (the album’s second classic) is a clear indicator of where Springsteen was headed. He wanted to face life head on. He saw many around him suffering and trying to merely survive. He took this struggle and infused it with his more restrained production. While it may not be as triumphant as Born Ton Run, this was done so purposely. He wanted to dial down the music so that the lyrics wouldn’t just be deciphered, but felt and absorbed. Lastly, the album’s title track is finds a narrator who has experienced immense loss but that doesn’t stop the fiery determination. A far cry from the lightweight material that was the rage in the 1970′s, Springsteen takes the listener on a voyage through disappointment and lost illusions. Not as romantic as “Backstreets”, but more primordial but ultimately redeeming. At the song’s and album’s conclusion, these characters may be broken, but they’re not defeated. The philosophical nature of these songs elevates the record and Springsteen’s mystique. The album as a whole is more potent as a collection than when listened to individually. Songs like “Streets of Fire”, “Factory” and “Something In The Night” may not be in the upper echelon of Springsteen’s collective work, but their themes are the glue that holds this record together. Without them, the album wouldn’t have maintained its credibility or weightiness. 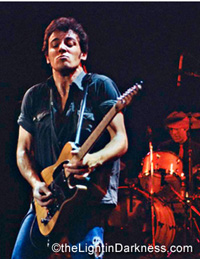 Is Darkness on the Edge of Town an unqualified five-star classic? It’s close but just misses. One thing Springsteen fans tend to do is romanticize the prominence of Darkness. By no means is it bad, but people tend to confuse the scorching live versions of these songs with their studio counterparts. The tour in support of this record was one for the ages. Never before had anyone seen a performer so willing to not just give so much physically every night (with almost every show passing the three-hour mark), but the emotional drain on his psyche had to have taken a hit as Springsteen didn’t just perform these songs…he lived them. The performances elicited far more than your standard blood, sweat and tears. The E Street Band, while always a great band, reached new heights on the 1978 tour. They became the band all others were judged by with their marathon shows and illustrious performances. If there is one thing missing from Springsteen’s catalog, it is an official release from this tour. Rolling Stone magazine and numerous other publications raved about the tour and when you listen to the FM broadcasts from the Roxy, the Agora, Passaic and Winterland, you find a band that would shake the foundations of the theater to its core. The Darkness material soared to new heights on this tour and would continue to do so on The River tour a few years later. Springsteen has often commented how he feels the live versions of these songs are the way they were meant to sound. He’s also commented on not being happy with the final mix of the album, leaving numerous people wondering why he’s never attempted to remix it. The album could have even proven to be even more significant, as he left off “The Promise”, arguably Springsteen’s most cherished outtake. A re-recorded version appeared on 18 Tracks in 1999, but it lacks the time stamp of this period and the floating outtakes (while a tad pompous) probably should have found its way onto this album. Despite whatever reservations I have about the sound, production, songs left on the sidelines and mixing of this record, it doesn’t make these songs any less reverberating. These ten songs encompass the sound of dashed dreams and bewildered souls who are incensed at those who have held them down. There’s no thunder road to take flight to this time, these characters want a better life and instead of running from it, they hope to conquer it.

While the sweeping romanticism and sunnier melodies of Born To Run were long gone, the world was left with an artist with a keen eye on the daily fight to live. Instead of a street poet, a socially conscious artist emerged who would redefine the singer-songwriter definition over the next six-years. He put these unpretentious humans on a pedestal as people to look up to and a spotlight on their common trials and tribulations, making the fight to overcome them all that more miraculous. Darkness on the Edge of Town is a spiritual guide for living life and learning how to come to terms with its hardships and ultimately to take action and make it better. Amidst these ten songs are harsh truths many of us don’t want to contemplate, but with Springsteen laying it out for us, it’s impossible to deny. In the end, he remains defiant and we do as well.