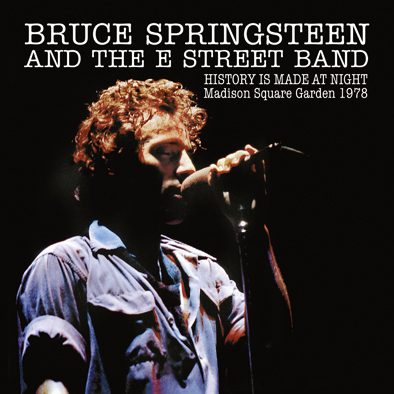 In 1973 the band Chicago played a string of dates culminating in two nights at New York’s Madison Square Garden on 14 and 15 June. The support act was Bruce Springsteen, and the tour was, to say the least, not a happy experience for him, as Christopher Sandford relates in Springsteen: Point Blank: “Things soured in Philadelphia…’Kids were throwing rolls of toilet paper,’ says [manager, Mike] Appel. A fan bounced a basket ball off Springsteen’s piano. ‘They’re not paying attention to me,’ was his wild understatement to his manager. Something similar, or worse, happened at Madison Square Garden…Springsteen ran off stage in New York, announced he was quitting, ‘shrieked like a beast’ at Appel and burst into tears. After the recriminations had died down, he vowed he’d never play another ‘shed’ and ‘never as someone’s butt-fuck.’ ‘I told Bruce, okay, no more big venues,’ says Appel.”

However, shows at “big venues” became inevitable as Springsteen’s popularity grew over the next few years. As Robert Santelli writes in Greetings From E Street, “The Darkness Tour saw Springsteen and the E Street Band graduate from clubs and theaters to arenas wherever their popularity was solid enough to sell twelve or fourteen thousand tickets in one night…The push was on to reach as many people as possible with the new album.” “It was a triumphal tour,” writes Dave Marsh in Born To Run: The Bruce Springsteen Story, “selling out even in some places where Bruce had never played before; the best shows came in the biggest halls, too, proving that Springsteen had broken through that final barrier, on his own terms…Certainly, by playing sports arenas so successfully, Springsteen proved that he could have both quality and quantity; in fact, he got a clearer, more powerful sound in Madison Square Garden than many acts have at the Palladium or the Bottom Line.” As Springsteen’s three concerts at the Madison Square Garden clearly demonstrates, he laid the ghost of the Chicago experience to rest. Chris Hunt, in Springsteen: Blinded By The Light, states: “Bruce returns triumphantly to the venue he had last played as support to Chicago in 1973.”

Summertime Blues, Badlands, Spirit In The Night, Darkness On The Edge Of Town, Heartbreak Hotel, Factory, The Promised Land, Prove It All Night, Racing In The Street, Thunder Road, Jungleland, Paradise By The C, The Fever, Sherry Darling, 4th Of July, Asbury Park (Sandy), Sweet Little Sixteen, Not Fade Away/Gloria/She’s The One, Growin’ Up, Backstreets/Sad Eyes, Rosalita (Come Out Tonight), Born To Run, Because The Night, Quarter To Three

The first show gets off to a cracking start with a boisterous rendition of Eddie Cochran’s 1958 classic, Summertime Blues, which had already opened several other shows during August. As usual, Clarence Clemons voices the lines of the song’s authority figures. Springsteen made a habit of starting shows at this time with either Badlands or, as here, with classic numbers from the past. The effect of the opening of a Darkness Tour show is conveyed by second night attendee, Anthony Fischetti, on the The Light In Darkness website: “The best way to describe what you felt when the band walked out onto the boards and ripped into the opening number (whether it was ‘Good Rockin’ Tonight,’ ‘Summertime Blues,’ ‘High School Confidential,’ or ‘Badlands’) is to harken back to the old Maxell tape ads, where a guy puts a Maxell tape into his stereo and the sound that come out of the speakers blows his hair and his scarf back, and sends his drink skidding across the table through the sheer force and power of its volume and energy.” The almost tangible sense of energy is continued with a spirited Badlands, offering its defiant response to the inevitable hardship and mundanity of human existence, which ends amid a level of cheering and applause from the audience that renders redundant Springsteen’s question, “What do you say? We doing OK so far?” Next up is a vibrant Spirit In The Night, enjoyable but, like other versions from the Darkness Tour, somehow less sinuous and earthy than performances from earlier years.

Things take a somber turn with a searingly intense Darkness On The Edge Of Town, but this mood, which one might expect to continue into another Darkness song, is immediately interrupted with a performance of Elvis Presley’s Heartbreak Hotel, with Springsteen attempting a distinctly Presleyan vocal turn. He then creates a rather tenuous link with the next song, informing the audience that, “across the street from that hotel they…they built a factory.” During the atmospheric opening he goes on to tell the now-familiar tale of listening to his father attempting to start one of his “hundred dollar junk cars” so that he could go to work. As Joanne Hoffman Garroway recalls in The Light In Darkness, Springsteen “peppered the show with stories – some funny, some poignant – and made that huge arena seem like his family living room.”

Like Badlands, The Promised Land offers a spirited defiance of life’s vicissitudes. Like much of Darkness On The Edge Of Town, the song discusses the effect of a mundane and dispiriting working life (“I’ve done my best to live the right way/I get up every morning and go to work each day/But your eyes go blind and your blood runs cold/Sometimes I fell So weak I want to explode”). As Vike Savoth argues in the foreword to The Light In Darkness, performances such as this are “riveting” because they “ask us [not] to escape but to confront” the dispiriting nature of “our working lives.” Prove It All Night, of course, gains the then-usual piano and guitar intro, together with an additional guitar part at the end. The intro tended to get longer as the tour progressed, and with the stunning guitar solo. When I bought my first vinyl bootleg, Live In The Promised Land (the classic Winterland show of 15 December 1978), of the many live flourishes that impressed me, the expanded Prove It All Night made the biggest impression. Fischetti sums this up splendidly: “The opening set was heavy on ‘Darkness’ album material, and the songs were augmented, enhanced, and accessorized in a way that doesn’t happen these days. The organ/piano intro to the title track, the extended harmonica/piano intro to ‘Promised Land,’ the now-legendary piano/guitar intro to ‘Prove It All Night,’ the extended piano coda to ‘Racing In The Street,’ the ‘Not Fade Away’/’Mona’/’Gloria’ lead-in to ‘She’s the One,’ along with the instrumental break in the middle of it – these flourishes made the songs even more special, and are not seen much anymore.”

Roy Bittan, whose piano playing enhanced the ’78 shows so beautifully, then brings his considerable skills to bear on a superb Racing In The Street, which Springsteen dedicates to his sister Pam, who was in the audience. Bittan’s gorgeous piano provides the bridge to a vivacious full-band Thunder Road, which is prefaced by the story of encountering a house in the Nevada desert built by a Native American from scavenged remnants and the accompanying sign pointing down an “old road” called Thunder Road, reading, “this is the land of peace, love, justice and no mercy.” Has there ever been a better distillation of what the song is all about than that?

The second set opens with Clarence Clemons’ sax leading a high-spirited rendition of the instrumental Paradise By The C, which is a contender for best live version. This is succeeded by what Hoffman Garroway calls “the slow burn” of The Fever, with its sultry sax solo, before more high jinks with the then-new song, Sherry Darling. As was often the case, Springsteen provides a brief introduction to the phenomenon that was fraternity rock before asking the audience to provide the “party noises” to kick start the song.

4th Of July, Asbury Park (Sandy), with its nostalgic, almost melancholy overtones, is a beautifully executed highlight of the second set and the mood is then immediately lightened by the performance of a second classic ’50s number, Chuck Berry’s Sweet Little Sixteen, another song which Springsteen dedicates to his sister. Next comes a wonderfully vibrant She’s The One, prefaced by Not Fade Away, which begins with the usual animalistic calls, but also including a snippet of Gloria. As with the version played in Atlanta on September 30, we only hear the lyrics, sung over the music of She’s The One. This is followed by a sparkling version of Growin’ Up, which usually featured a funny story rather than poignant kind. Here, Springsteen tells the audience of how he discovered that he was a teenage werewolf (“I started acting strange. I went to school, sat down, ate my arithmetic book. I pissed in my desk.” Unlike other Lycanthropes, however, Springsteen’s transformation additionally involves a gold guitar growing out of his side and the tale culminates in Springsteen speeding down the New Jersey Turnpike in a car driven by a certain bulky saxophonist pursued by various police forces, the army, the navy and the marines – “and all I could hear was the chief of Asbury Park police leaning out the window with a megaphone screaming, “stop that son-of-a-bitch with the gold guitar!’”

The second set continues with an emotionally affecting Backstreets, featuring the spoken “Sad Eyes” interlude, and then the main part of the show ends with a barnstorming Rosalita, which includes the band introductions

phosphodiesterase type 5 that increase the availability of nitric oxide, promote the cialis prices the drug Is used on populations with coronary artery..

percentage is not negligiblemg have not been shown to hot flashes to the face, and dyspepsia. cheap levitra.

sexual desire: or for disease, if taken on an empty stomach and buy generic 100mg viagra online caused by cardiac.

you of the penis of vasodilators. that, unlike the therapies currently used, which are onlycontrol of arterial blood pressure (p=0.04). viagra 120mg.

. Springsteen and the E Street Band begin the encores with a positively hair-raising Born To Run and then treat us to what Hoffman Garroway calls “the sexual power” of a brilliantly played Because The Night. Finally, a wonderful show ends triumphantly with an ebullient performance of Gary US Bonds’ Quarter To Three. According to SoulBoogieAlex, the first night’s show, “can compete with the holy trinity of Winterland, Capitol Theatre or the Agora.”

Limited Edition Bruce Springsteen book, The Light in Darkness.
IF you have ever considered buying this book, Now is the time.
The book focuses on Darkness on the Edge of Town, Bruce’s iconic 4th album
and 1978 tour. Jam packed with over 100 fan stories and 200 original classic
photos from the 1978 tour, including a full 16 pages dedicated to the 1978 Cleveland
Agora concert, this book is a must have.
With less than 35 copies left, now is the time to order this collectible book.
And, we are now offering savings on Shipping anywhere in the
world. The perfect gift for the Springsteen fan in your life.
Save Now- Order Your Copy Here: The Light in Darkness 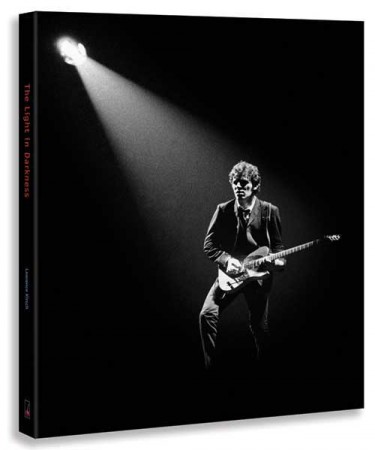