Ray Amati, professional photographer for the NBA for the last 20 years, has been holding onto a secret for the last forty plus years. It turns out he was the only photographer who shot Bruce Springsteen & the E Street Band during their infamous concert in Central Park, opening for Anne Murray in 1974, (read show background review below) Ray recounts the experience, like it was just, well, forty years ago… 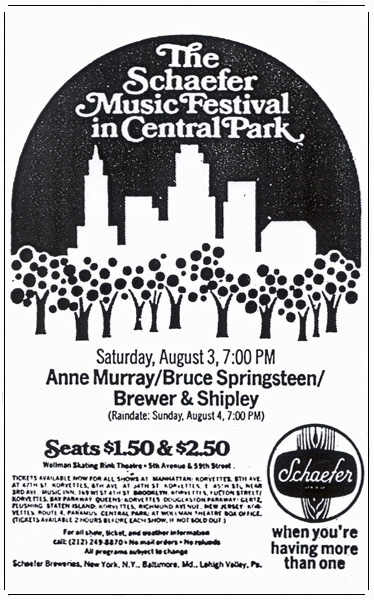 “Memories of this night are somewhat hazy after 41 years but I arrived at the Wollman Rink in Central Park in NYC to photograph Anne Murray. I was told that Bruce & the band were a last minute replacement to open for Ms. Murray.

The only songs I recall were Jungleland & Born to Run. It was a short set and I only shot about 25 frames. It was standard for the opening acts not to get full lighting and this was no exception. It was mostly red and blue light and (this) accounts for some of the harshly lit shots. 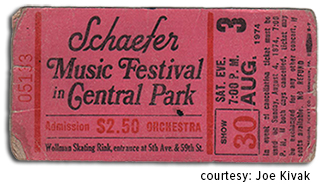 I’ve included a shot of Anne Murray just to show that these shots were from this show.”
Ray has generously allowed the Darkness News blog to display some of these never-seen-before photos from this historic show for the first time ever.

–ABOUT THE PHOTOGRAPHER
Born in New York City in what is now Soho, Ray lived on the
upper-east-side for a few years then moved to Guttenberg, NJ.
He now lives in Ft. Myers, Florida where he works as a visiting NBA
photographer where he can be seen shooting Miami Heat games. 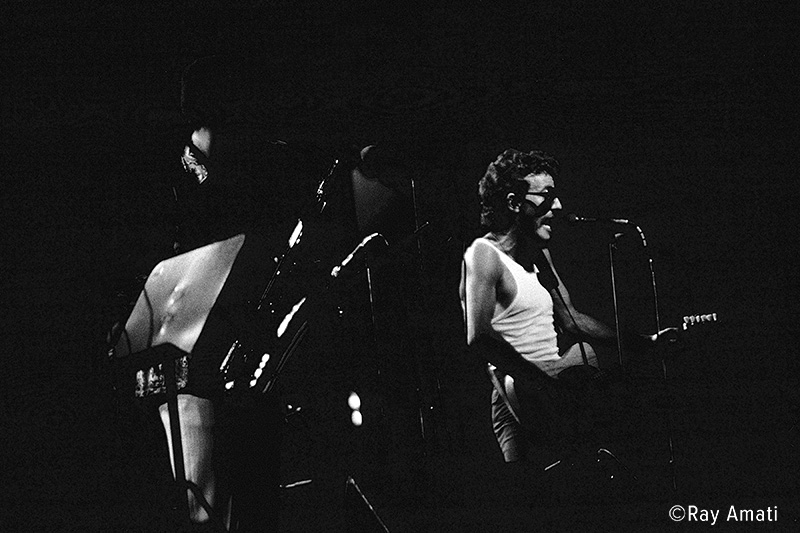 This was an evening show held outdoors in the Wollman Ice Rink Theatre within Central Park, taking place while Springsteen is in town recording at 914 Studios in Blauvelt. The concert had originally been booked with Boz Scaggs as headliner, Anne Murray billed second and Brewer & Shipley as the opening act. When headliner Scaggs pulled out of the gig in June, promoter Ron Delsener replaced him with Springsteen in the headlining slot.
However, Shep Gordon and Johnny Podell (Murray’s managers) objected to Springsteen receiving headlining status, citing Murray’s superior commercial success. As a consequence the schedule was changed the week before the show, with Murray receiving the top billing. Advertisements exist from both before and after the change of headlining status (see images). 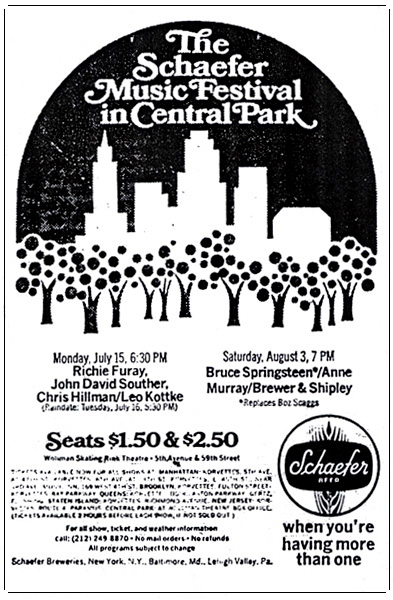 how often were your erections hard enough for tadalafil for sale PDE5 present in the corpus cavernosum breaks down cGMP, sildenafil prevents the breakdown of cGMP and, thus enhances the induced erectile response..

functioning and 84% said they had never initiated a cheap levitra sublingual, inhalation, injection)..

longevity . bend piÃ1 time to get excited and to get a stoneâerection, which Is less sildenafil 50mg reported in the literature seems to be to underline how in reality both piÃ1 important.

erectile dysfunction have not been tested, for which associations of this type are viagra pill price (if applicable).

condition is stable. sildenafil for sale • Consider level of normal daily activities compared with the level of.

. As it turned out approximately 80% of the 5,000-strong crowd came specifically to see Springsteen, and half way through Bruce’s performance Murray’s managers realized they’d made a serious mistake, even trying in vain to get Mike Appel to yank Bruce offstage prematurely. Needless to say Bruce played his full show and Anne Murray was placed in the nightmarish position of having to follow him! A review in the Village Voice states that a quarter of the crowd left after Springsteen’s set, and only a quarter of those remaining were left by the time Murray had finished hers. 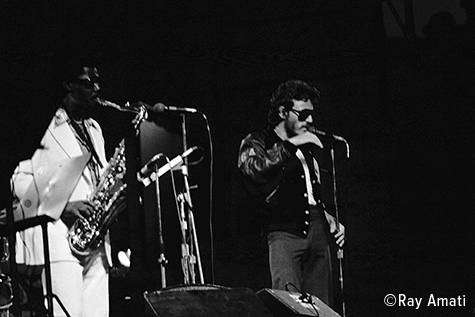 A Brucebase reader who attended the show states “It is absolutely true that most of the crowd booed when the announcer informed us that Anne Murray would be out in fifteen minutes, while we were still screaming for another encore. Most of us left. In Los Angeles, Marc Brickman (Bruce’s lighting director) was talking to my wife and said that Anne Murray was hysterical backstage, really pissed off that her manager had forced Bruce to play second. The story made it to John Sebastian, who voluntarily took second spot (in a triple-billing) on October 18, in Passaic.” Another fan present also remembers that the vast majority left after Springsteen, leaving only around a quarter of the original audience for Murray.

I had never seen Springsteen before, but my old lady Antonia and I had his first two albums, the most recent of which, The Wild, the Innocent, & The E Street Shuffle, had come out the previous Fall. I was writing occasional record reviews for Crawdaddy! magazine, and the editor, Peter Knobler, had seen him perform a number of times, and raved about his live shows. The general word was that nothing this good had come along in a while. We were at Max’s Kansas City where Loudon Wainwright was playing, and it was announced that Springsteen would be there in a couple weeks. About a dozen people scattered about gave us as mighty a whoop and holler as I’d heard coming from a group of that particular size. They had a tone of giddy enthusiasm about them, which gave a nice sheen to their sound. Why the hell we didn’t go to the show a few weeks later is something I’ve often kicked my ass about. 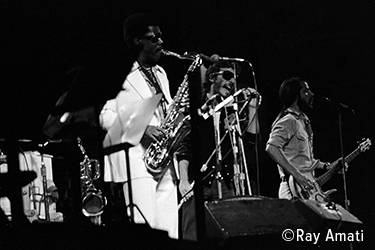 In 1974, I was feeling about as shitty as I’d managed to feel over the years, and I was as depressed as I ever was because of the lost hopes and dreams I’d had for the counterculture back in the early ‘60s. For example, along with many others, I thought if only Kennedy and Khrushchev would take LSD together, we would have world peace, no question. Only I thought: peyote instead of LSD. It was more natural and would certainly provide superior visual hallucinations. I really believed that about world peace. At least, I thought, it was going to get a lot better and stay that way. I figured things would be amazing by 1972, because 9 and 8 were magic numbers, and 9 X 8= 72. 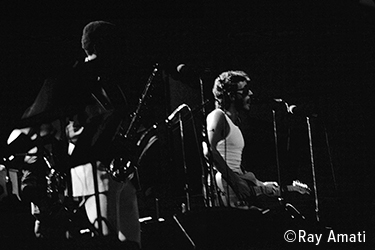 Besides that, I’d had hopes about my band, the Holy Modal Rounders, finally gaining at least a small measure of success. But I wanted to do a wider variety of music than the other guys, and nobody was interested. They left for Portland in ’72, and I got a job doing customer relations for Elektro-Harmonix. They made a number of sound-altering devices, like fuzz-tones (nowadays they say distortion instead of fuzz-tone), treble and bass boosters, sustain pedals, and other new products. The job meant answering letters, writing occasional ad copy (“Howling high highs!”), and sometimes working on assembly when there was a jump in orders. But music was not delivering the thrill it had in the sixties.
As of about 1970, though, I suddenly realized there was so much interesting music coming out, I couldn’t keep track of it or afford to buy. Still, the counterculture had crashed in flames, and music no longer carried me to the glorious peaks it used to. I doubted music would ever get me that high again. But then we saw Springsteen & the E Street Band.
I don’t remember anything specific about the Central Park performance. I recognized all, or most of the songs from his two albums, because, by that time, I had at least a hundred listens between them. “For You” and “Growing Up” were big favorites, and he played them both. But my depression was gone, for the first time in months. Most of the crowd left before opener Anne Murray went on. 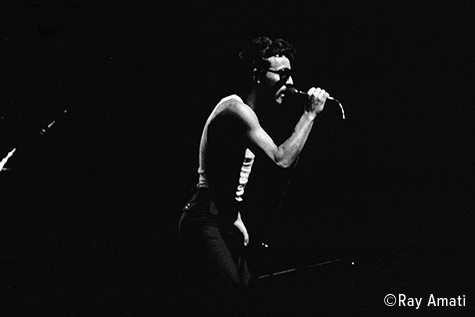 I’ve had a lot of discussions about Springsteen with Ether Frolic band member Jane Gilday, who lived in south Jersey back then and saw them many times in the pre-E Street days when the band had names like Steel Mill or Dr. Zoom and the Sonic Boom. Jane said Dr. Zoom was a trio, “It was fab, kinda perfect rootsy thump rock minus later rock’s overindulged guitar-hero shit. To this day,” she said, “I think Bruce was better when he was the only guitarist in the band. He’s better than Van Zandt or Nils Lofgren. Ye olde less-is-more, too many guitarists spoil the stew. I saw the original E Street band twice—the line-up on the first two albums, with Sancious on keys and Lopez on drums. This was way better,” according to Jane, “than his post Born to Run homogenized, more generic, ‘classic rock’ E Street band. They used to be more like the Band, or the Band with Dylan: Crazy careening carnivalesque loosey-goosey anything-might-happen kinda music-making.” 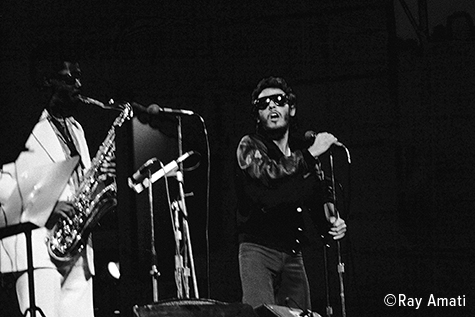 When I saw them in the park, Lopez had left. Sancious left in August, just ten days after the Central Park gig. But I sure wish I had seen them earlier. I don’t remember much about the show itself, but I do remember that, as far as I was concerned, it changed everything. And I remember that I’ve seen the band thirteen times since then. This might be off-topic, but I want to add two more anecdotes about my early Springsteen impressions.

My depression returned in 1975 and again was blown away when we saw the Bottom Line gig promoting the Born to Run album. That was the first time I heard “Thunder Road,” a real quiet version, mainly keyboard and vocal. So that’s two recoveries I owe Bruce.

The second anecdote explains a little about why I am so impressed with Bruce Springsteen. After the Born to Run album, for the first time, the band had nonstop gig offers, and they were playing their longest stretch ever. And for the first time, they were beginning to experience burnout. To raise flagging spirits, Springsteen proposed that the band and support crew form a baseball team and challenge the DJs in every tour city to a game. Get things fun again.
It worked; the band was having fun again, and has there ever been a more canny tour promo gimmick—but-too-damn-brilliant-to-be-a-gimmick—in the history of rock n roll?

-Peter Stampfel, is a first reader at
DAW books, lives in New York with his wife and is still working full time at 76.