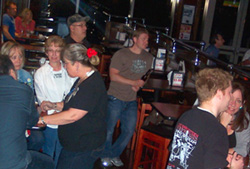 ‘Twas the night of Saturday April 21 outside McFadden’s Citizens Bank Park, the Philadelphia bar/restaurant located right where the Phillies play (and where Bruce Springsteen & The E Street Band will perform twice in early September.) It was raining “harder than a cow pissin’ on a flat rock,” to quote the colorful speech of the late, great Tex Vinyard, Bruce Springsteen’s first manager. It also was so windy that one might have expected the doors at McFadden’s to blow right off their hinges and the ghost of the Big Man himself to walk in, declaring his desire to play. While that didn’t happen, the legacies of Tex, Clarence and many others dead and alive still filled the place at the first-ever Philadelphia Springsteen Memories Roadshow.

Despite the lousy weather, a group of dedicated Springsteen fans braved the elements for this very special gathering. They all brought great memories of Philly-area encounters with Bruce and his music as old as the early ‘70s and as recent as his two shows in Philadelphia just last month. Some also brought some very cool “artifacts” to share with fellow fans. Among them were Dave and Kathi Alven of New Jersey, who brought something very appropriate indeed for an event inside a ballpark: an authentic team-member t-shirt from the legendary “E Street Kings” softball team, along with a full-color team photo. 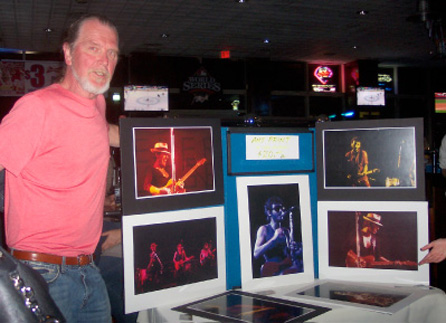 It was a great mix of new fans and old, male and female. For some, it was even a family affair. One young fan still in grade-school came sporting his father’s treasured “You Can Trust Your Car To The Man With The Star” bootleg shirt. (Dad was very proud indeed.) Special guest Art Reilly displayed many of his amazing photos from Springsteen’s early-70s Philly-area concerts. Reilly also displayed copies of one of his most prized possessions: Clarence Clemons’ and Danny Federici’s handwritten setlists from the famous Avery Fisher Hall show, where the stage collapsed during “Quarter to Three” before Bruce and the band got to close the show with “On Broadway.”

A fun, meaningful evening was made even more special by the donations raised for two charities long supported by Bruce Springsteen: the Kristen Ann Carr Fund and Philabundance. Special thanks to published scholar on Springsteen fandom Linda K. Randall for helping to collect the donations while continuing her ongoing studies of fan communities in action.The Springsteen Memories Roadshow concept launched successfully last year with a Boston event, and the Philly event has introduced a charity-fundraising element to the proceedings. Combined, these two Roadshow events now offer a model that can be used by many other fans to launch similar events in their necks of the woods. If you’re interested in organizing a Springsteen Memories Roadshow where you live, please e-mail info@thelightindarkness.com for more information.