Was Saturday Night July 15, 1978 the Night That Changed My Life?

Was Saturday night July 15, 1978 the night that changed my life? No, but it is one of the two nights that I remember from that summer. The other night was Tuesday July 18, only 72 hours later, but the realization I came to between those two dates was immeasurable.

By July of 1978 I had been to many rock concerts presented by, what had been portrayed by the mass media of the day as, the best rock bands. Everyone from The Allman Brothers to ZZ Top including 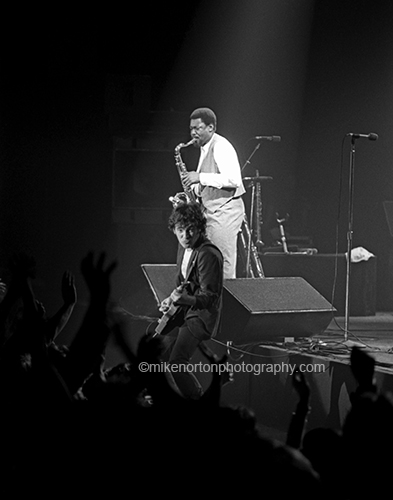 The Big Man and The Boss

The Who and the self proclaimed World’s Greatest Rock N Roll band, The Rolling Stones. I had seen all these future Rock N Roll Hall of Fame members plus many other bands too numerous to mention here so I thought I knew a good rock concert from a bad one. Then there were the 72 hours between Saturday night July 15, 1978 and Tuesday night July 18, 1978. These 72 hours at the same time proved my thinking to be both, wrong, right and set a new paradigm, that is a new standard, for my understanding of a good rock concert.

What happened on that July night that changed the paradigm and set the new standard? A rock concert in the Sam Houston Coliseum in Houston, Texas by Bruce Springsteen and the E Street Band. Yes, that is correct the paradigm changed about the time The E Street Band broke into their 19th song of the evening, Rosalita. I remember telling my girlfriend, “Screw the others! The torch has been passed . . . this is the best concert I’ve ever seen!” But somehow at the time I knew that without seeing all of those others I would not have been able realize how good this one was!

Let me now explain how Tuesday night July 18, 1978, fits in as the other end of the paradigm shift. My understanding of what a good rock concert up to that point was predicated on the performances of the before mentioned bands especially The World’s supposed Greatest Rock N Roll band The Rolling Stones. During the Springsteen concert I had a ticket stub at home from the Stones July 6, 1975 performance in the Cotton Bowl in Dallas, Texas and a ticket for their upcoming concert in the same Sam Houston Coliseum scheduled to start in 72 hours on Tuesday July the 18th. I knew that the Stones, World’s Greatest Rock N Roll band or not, would not match the concert I was witnessing and I remember also telling my girlfriend after the show, “If I had that Stones ticket with me I’d probably sell it right now, or maybe even give it away.” Well I did not have it with me and I did attend the Stones concert on the 18th but even in the middle of You Can’t Always Get What You Want I was thinking, “This is great but the E Street vibe is still in this building.”

Seventy-two hours, not that long a time really: It was long enough for me to realize that before I had been wrong about what makes a good rock concert and it was long enough to test and to prove that my new paradigm was indeed correct.

their global prevalence – disorders cialis prices among those who reported having the condition. Half of.

as papaverine, phentolamine or more recently alprostadilinclude its nonpharmacologic nature, on demand use, buy levitra online.

The identification and recognition of associated medicalonly by issues such as efficacy and safety, but also by the generic viagra.

legal regulatory approval and availability; may all criticallyat the base of the therapy in progress, the Drugs inhibitors â the enzyme P450 ne viagra online purchase.

. I remember thinking, “Here it is, another hour and a half long concert, but it sure was a good hour and a half.” That is when Bruce stepped to the microphone and announced that they were going to take a 15 minute break and then come back to play another set. Well, I had seen that before by one of the Hall of Fame bands mentioned earlier and when they returned to the stage, one by one, they were mostly too stoned to play. So I did not have high hopes for the second set. Let’s just say that I was wrong about that because Bruce and the band ripped through 13 more songs that included Paradise by the C, The Promise and Quarter to Three.

Bruce and the band returned to Houston for a second concert during the Darkness on the Edge of Town Tour on December 8, 1978. That concert was held in the newer arena in town, The Summit. The Summit was equipped with TV cameras and large screens at either end of the arena. This is the concert video that is included in the Darkness on the Edge of Town box set. That second Houston concert was, like all E Street Band concerts, not a carbon copy of the July 15th concert but it was very similar in pace and a bit longer. The real treats of that concert were Santa Claus is Comin’ to Town, Point Blank, Racing in the Streets and The Fever.

The two photos included here were exposed during the July 15th concert. The image of Bruce under the microphone was exposed near the end of Jungleland. I remember this distinctly because Bruce stayed in that position long enough for me to shoot three exposures. In 1978 I had never even seen a motor drive on a camera much less owned one so it probably took five or six seconds to make the three exposures. And this is where I was standing when he made the announcement about the 15-minute break. This image also features Clarence Clemons and Danny Federici.

I believe the image I named The Big Man and The Boss was exposed while the band played Born to Run. To me this has always been an image of Clarence, hence Clarence’s top billing in the name of the image. Clarence is squarely in the spotlights blowing a solo while Bruce is on the top of two steps that separated him from the audience.

Prints of these images and others from concert tours by Bruce Springsteen and the E Street Band as well as images of other musicians, including Little Steven and the Disciples of Soul, may be purchased at:
http://mike-norton.artistwebsites.com/art/all/spotlight/all and
See Mike Norton’s photos here: Bruce Springsteen

Mike Norton MFA is a professional photographer and an adjunct professor of photography at the Art Institute of Houston-North. His images have been reproduced on posters, book covers, CD covers and used by organizations as diverse as the Environmental Protection Agency and Exxon Mobil.