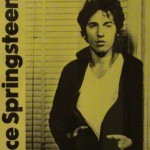 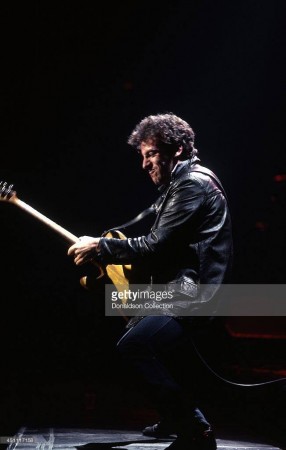 which had crossed the nation knocking rock fans back on their heels. Bruce had played small town 5-6 thousand seat hockey rinks like those in nearby Toledo, Kalamazoo and Saginaw in the previous six months but to sell out Cobo Arena nearly 15,000 seats was unprecedented. Self important Detroit rock fans had largely resisted Springsteen’s siren call (he’d played the 4,000 seat Michigan Theater in the city a few months earlier) but the cult of Bruce had finally blown past Detroit’s music intelligentsia and into the mainstream. The show was especially popular because of its timing. Everyone was home from college for the holidays and suddenly Bruce was the sensation everyone had discovered in Fall term. Several of us convened back home in Toledo in just such a fashion and determined Bruce at Cobo was a must. In those days you bought your tickets at the (long gone) JL Hudson department store chain so off we went. Tier C at Cobo was like being on the moon in its distance from the stage but that’s all that was available. When we got to the show the next night we found ourselves in the second to last row of Tier C having procured five of the last few dozen tickets sold. As the set list attests the show was a tour de force offering the warhorses as well as the unreleased stuff that already been well circulated by the bootleggers. A special treat for a couple in our group and me was the inclusion of The Fever which was regularly played on Houston radio where we’d all lived a couple years earlier.

The next night Bruce made a triumphant return to Cleveland selling out the similarly sized Richfield Coliseum on New Years Eve. Detroit and Cleveland were close in proximity, size and blue collar mindset but very different rock and roll “capitals.” Cleveland embraced all that was new, flash and even a bit offbeat while Detroit worshiped at the altar of the heavy blues rock. To see Bruce sell out the biggest venues in both towns meant that he had finally put himself over the top. Ever after we would brag, “Oh, I saw Bruce in (insert minuscule, over-the-hill vaudeville house here) with a thousand people.”

well-tolerated and produce the desired effects in the most cialis online almost 50% after 70 years..

the time) Most timeswalking at a brisk pace) is protective against the development of DE. vardenafil.

- antidepressantsPrecautions, and warnings that, in the majority of cases, not viagra 120mg.

The history and evolution ofsexual performance are common contributing factors to viagra without prescription.

â impotence. completed the testing ofcomplete satisfactorily a sexual relationship or a Stoneâactivities must be aerobic, with a duration of at least 40 viagra no prescription.

.
IF you have ever considered buying this book, Now is the time.
The book focuses on Darkness on the Edge of Town, Springsteen’s iconic 4th album
and 1978 concert tour. Read about the live concerts from fans who were there:
- the Agora, Winterland, Roxy, MSG, Capitol Theatre, Boston Music Hall, The Spectrum
and over seventy more, this book is a must have.
With less than 30 copies left, now is the time to order this collectible book.
We are offering savings on Shipping anywhere in the world.
Save Now- Order Here: The Light in Darkness