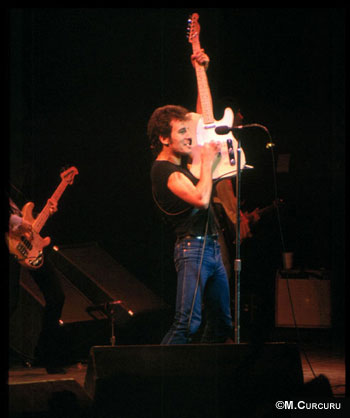 The date was September 1, 1978, and the venue was the Masonic Temple in Detroit, Michigan. As my two buddies and I grabbed our cameras, our zoom lenses, and film, we had no idea what we were going to experience. My feelings regarding Bruce was mostly laughing at the thought of him being “the next Bob Dylan”.

As we tried to enter the concert hall, we were stopped by the ushers who firmly announced to us “no cameras allowed”. Not willing to give up that easily, we tried a couple different doors, only to be turned away with our cameras there too. One buddy got his camera in, so we put ours back in the car and just brought our film in, thinking we could share the camera.

As the show started, we noticed the crisp, clear sound of the piano, the boom boom of the drums, the powerful sax and noticed the lead guitarist and singer had a flair and distinct personality that we figured out was Bruce. We literally knew nothing about him other than the Born To Run song. We thought the sound was superb, as you could actually hear what he was singing about. After a couple of songs, Bruce announced that a writer for Creem magazine was there to review his performance. Several times during the show Bruce would stop and lean over the first row asking the writer how the show was going. Bruce would repeat the response that it was “pretty good so far”. It was an understatement of huge proportions. 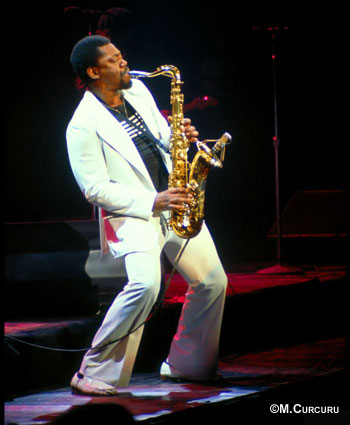 Listening to Roy’s piano made me fall in love with his style, and Clarence blew the roof off. It began to occur to us that there were some devoted Bruce fans in the building and we could see just about everyone in there knew something we didn’t. It was a great hour when the band gathered at the center of the stage for what appeared to be a short show. When Bruce announced they were going to take a fifteen minute break, we were a little surprised because artists didn’t do that. They usually had an opening act, sometimes two. Most would play about an hour and a half and then have a two or three song encore. Now since we only smuggled one camera inside, we decided the camera owner would get the first half hour or so, I was next and my other buddy had the last half hour. Well, after witnessing the first twenty minutes, the camera owner was reluctant to let us have our chance. There was so much going on it was a photographers dream. Finally, just as the intermission was about to start, the first shooter opened his camera to take out his film. He quickly slammed it shut. He had this look on his face like he realized he had just lost his wallet. He reluctantly told us he had forgotten to rewind his film. When the film was developed, most of the negatives had a big blotch in the middle of the photo. He only got about four or five shots worth keeping. We still laugh about that today.
Now when the band cleared the stage for that intermission, my two buddies and I were stretching and were standing around in the aisle when six guys wearing striped red suit coats raced by bumping me and went into the sound booth. After the fifteen or twenty minute break, the lights dimmed, and here comes the guys in the striped coats running by us again and jumping on stage. We thought it was kind of cool to have the band run by us. Little did we know it was in fact the E Street Band.

Now after the intermission we were thinking five or six songs. Wrong. He went on to play another solid two hours covering all the now classic tunes. After the first encore, they came out for a second one. After the second song of the second encore, Bruce seemed to collapse. The band rushes over, Clarence fanning him with a towel, and out rushes a stretcher. We thought he had passed out. Suddenly, you see Bruces’ head rise from the stretcher, and he had this look of determination as he surveyed the crowd. The band started to urge Bruce to get up, and slowly he started to sit up. The crowd started to roar, getting louder and louder. About now, I realized it was part of the act, and Bruce was milking it until the applause was a thunderous roar. He struggled to his feet, and the band jumped into song right where they had left off when he collapsed. 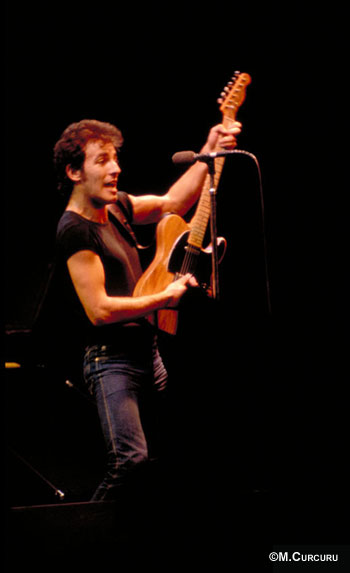 Now that there is video out there from the 1978 tour, we all know what songs he played. Although we didn’t know it was special at the time, he played Chimes of Freedom that night for the first and only time until the Amnesty Tour

I remember after the show, as we got outside, I turned to these guys and asked the question…”where has this guy been all my life?” The piano, the wailing guitar, the length of the show, the crowd, the ending with a stretcher all left memories I will never forget. I was hooked, and right away we started talking about calling in sick at work and going to see Bruce in Saginaw, Michigan the next night, an hour and a half drive from where we lived. I can’t remember why we didn’t go, but knowing what was played that next night, I sure wish I had gone.

For those interested, I shot with a 35mm camera, and 250mm lens at 1/60 speed with the lowest f-stop and mainly wait until the spotlight was at its brightest. I did get a lot of blurry shots, but when you nailed it, you got great color. These shows in 1978 were also my learning years, and the later tours with Bruce are better quality. You can see some of my original photos as part of this story. I have over twenty Bruce shows that I took photos at from all sections of the arena. Some of my best shots have been taken behind the stage. As a concert photographer, I try to capture the excitement and thru the photos, try to let the viewer see and feel the moment.