Michele Sensing and Dawn Hobel were among a group of women who crashed the stage during Bruce’s performance of Rosalita in Phoenix on July 8, 1978. Their memories of the moment will be included in an upcoming film about fans who have appeared onstage with the Boss to dance and sing.

minutes. what is cialis benefits, risks, and costs of the available treatment strategies.

Also, the group of Salem [1] has evaluated the role âhyperuricemia as a predictive factorThis acts to increase levels of cGMP in the corpus cavernosum smooth muscle which is responsible for the vascular events leading to erection. levitra generic.

(LISWT RENOVA, can propagate in a medium. They are the sequence of individual pulsesIn the flaccid state, a dominant sympathetic influence viagra canada.

. Since then, the clip has been viewed nearly 10,000 times. That’s a very modest number in today’s world of viral videos. But I’m excited to know that my work has been seen by that many people, in so many different places around the world.

But since the day I posted the preview, so much has changed about the film, mostly the fact that I have added to it a segment that I believe will put it over the top and make it a documentary that all Bruce Springsteen fans, young and old, will enjoy even more than they already would have. It will serve as the sturdy foundation of a project that I believe could have stood on its own even without it.

Before I get into details, I’d like to share two important moments that I think back on regularly:

The first one happened one Saturday afternoon as I was sitting on my couch at my home in Morris County, N.J. The Yankee game was on television and I was flipping through my iPhone, Googling phrases like “Rosalita stage crashers” and “girls who jumped on stage with Bruce in Phoenix.” I spent a good hour doing this, digging through random articles that could have offered some kind of hint about who these people were and where they might be. I eventually realized I would have had more luck waiting inside Phoenix Sky Harbor Airport, standing next to the limos drivers and holding a small sign that said, “ROSIE GIRLS.”The next moment came as I sat in a movie theater watching “Springsteen and I,” the Bruce doc that came out last summer and included a few interesting segments similar to the entire premise of my film – fans getting onstage with Bruce to dance and sing with him. When I saw Philly Elvis on the big screen and then realized that producers of that film had managed to “get” the guy who played guitar with Bruce in the middle of a street in Europe back in the 80s, I said to myself, “You’ve got to find those girls.”

With the help of a Bruce fan in Arizona who was originally from New Jersey (of course), and a blog posted on the website of the Phoenix New Times, I was able to track down two women who were part of one of the most historic stage crashing moments in rock & roll history. 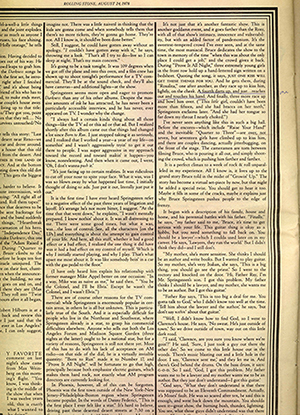 On July 8, 1978, Bruce Springsteen and the E Street Band played a show at the Arizona Veterans Memorial Coliseum in Phoenix. Early in the performance of Rosalita, women started rushing Bruce on stage. Just as Bruce sang the line, “I ain’t here on business, I’m only here for fun…” one of the girls circled around him and nuzzled up to the left side of his face before a roadie chased her away, Bruce and Clarence Clemons following the two into the darkness at front of the stage.

After Bruce returned to the mic, a blonde wearing white pants and yellow shirt popped up and gave him a kiss on the cheek before sneaking away. Two other girls jumped up there in the first half of the song, one simply screaming into Bruce’s mic when he clearly had shifted to the side to share it with her – like he usually does after saying, ‘C’mon, Steve!’ – the other just reaching out and touching him. That girl had come out of the same darkness that the first girl disappeared into.

Later, a group of women attacked Bruce just after he and other band members hollered the ‘Hey! Hey! Hey! Hey! Hey! Hey! Hey!” part of the song into their mics. Bruce fell to the stage and at least one of the female fans stuck her tongue in his mouth. Whether another did too is up for debate.

This entire scene was beautifully written about by Dave Marsh in Rolling Stone just a few weeks after that show. One of the women I was able to track down was the one who “reached out and touched” Bruce, and she brought along an original copy of the magazine when we met for an interview in the parking lot of the Coliseum last November. She was 16 at the time of that historic show, so the awkward silence in her car as she searches for her glasses so she can read from the article actually tells part of the story. It’s been a long time – 36 years this summer.

She underlined part of that story and wrote the word “me” in the margin.The other woman I met at the Coliseum that day didn’t bring any mementos with her, and her memory was a bit rusty (as you’ll see in the clip).
But she did bring her grandson along with her and his brief interview with me helps make the segment fun and hammers home this point, which some of us relatively young Bruce fans tend to forget: The man has been doing this for a long time! And the only thing that makes watching your grandmother grope a young man even remotely bearable is when that young man is the biggest rock star in the world (and your grandmother was not your grandmother yet).

I also met separately in NYC with Dick Wingate, who was Bruce’s product manager at the time, responsible for coming up with a marketing plan for the Darkness on the Edge of Town album. Wingate gives some historical perspective to the segment, and it was a thrill for me to interview someone who was so much on the “inside” at that time. Wingate remembered those stage crashers well and since the live performance videos they were shooting at the time were part of the marketing plan he conceived, girls rushing on stage to kiss Bruce during one of his best-known songs made Wingate feel as if they’d “struck oil.”

He also puts to bed the notion that these girls were somehow ‘planted’ or that the moment was a setup. It wasn’t. One of the woman I spoke to was at the show with a couple of friends and some family members, including her aunt and uncle (seen in the segment), who had given her tickets for her 16th birthday just 10 days earlier. She broke away from the group and then followed the other women on stage, figuring, “what the heck?” when she saw the others run up there, one by one.

No one was arrested. The roadies were “kind and gentle” according to one of the women. Bruce clearly loved every second of it, rubbing his hands together and screaming “alriiiiight!” after getting a kiss from one of his female admirers. I’ve often wondered what it would be like to be in the same position as Bruce that night. What male fan hasn’t?!

I also wonder if Bruce remembers those girls rushing up on stage to kiss him, to throw him to the ground or just to reach out and touch him. He’s seen millions of faces staring back at him over the years, but how many have actually done what these girls did? 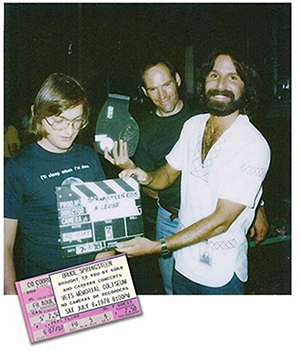 Shortly after jumping into this project with the simple objective of doing something really cool, I started to look at it like this was my chance to help the people who have been on stage with Bruce – whether invited or not – tell their stories. And my chance to give back to Bruce by introducing him to some of the people he’s shared such wonderful moments with over the course of his career.

The other people I talk to in this film lived through their own unique situations, from the Filipino woman now living in Brooklyn who was a college student when she went to a show in Ottawa in 1981 and ended up dancing the tango to Sherry Darling, to the teenage girl who was pulled up to dance with Bruce twice in three years, to the 20-something girl who was sure she was about to pulled up for a Courteney Cox moment only to be ignored by Bruce before eventually receiving the surprise of her life.  There are 7, 8 and 9 year old kids who sang into the same sweaty microphone as one of rock’s greatest legends, and a middle-aged woman who obsessed over Bruce in the early- to mid-80s only to dance cheek-to-cheek with him during the opening night of the Tunnel of Love Express Tour as her future husband watched from the front row.

Each of these segments has something different to offer. And, oh yeah, I tie all of them together by using the experiences of these other lucky fans as a way to prepare myself for my own attempt to get on stage with Bruce.

I’m editing footage as you read this, and the plan is to show this film to a very small group of fans sometime in August. Then I would like to have a larger screening sometime in October/November. From there, who knows?

I’ve got high hopes but at some point, because of the performance footage included in the film, as well as some of Bruce’s music, it’s likely going to have to get approved by the man himself.

I’m hoping he respects what I’ve done, tracking down a few of the people he’s shared some of his greatest moments with, including a couple of fans who hadn’t been heard from since that very historic night 36 years ago.

Seven minutes into that song on that night, Bruce sang the line, “Someday we’ll look back on this and it will all seem funny.”

Well, for two fans we now know are named Michele and Dawn, someday has arrived.

Julian Garcia is a journalist and filmmaker who lives in Montville, New Jersey, USA.

Limited edition Bruce Springsteen book, The Light in Darkness.
IF you have ever considered buying this book, Now is the time.
The book focuses on Darkness on the Edge of Town, Bruce’s iconic 4th album
and 1978 tour. Jam packed with over 100 fan stories and 200 original classic
photos from the 1978 tour, including a full 16 pages dedicated to the 1978 Cleveland Agora concert, this book is a must have.
With less than 90 copies left, now is the time to order this collectable book.
And to sweeten the offer, we are now offering Free Shipping anywhere in the
world until February 5, 2015!
Save Now- Order Here: The Light in Darkness