35 Years Ago: Bruce Springsteen Launches ‘Darkness on the Edge of Town’ Tour

When the ‘Darkness on the Edge of Town’ tour kicked off at Shea Hall in Buffalo, N.Y. on May 23, 1978, Bruce Springsteen was looking to restart his career after nearly three years on the sidelines. By the time it ended seven months later, he had cemented his reputation as one of the most electrifying performers in the entirety of rock music.

The story of the problems Springsteen encountered in making ‘Darkness on the Edge of Town’ is well-known. The success of ‘Born to Run’ in 1975 made him a star, but he soon learned that the contract he signed with manager Mike Appel put his lucrative publishing rights in Appel’s hands. Springsteen sued to break the contract, and Appel counter-sued, getting an injunction barring Springsteen from entering a recording studio.

Unable to make the follow-up to ‘Born to Run,’ Springsteen spent most of 1976 and 1977 on the road. The concerts furthered the E Street Band’s reputation as one of the best live acts in the country, as well as further integrating drummer Max Weinberg, pianist Roy Bittan and guitarist Steven Van Zandt – all of whom joined in 1975 – into the band.

In May 1977, two months after the ‘Lawsuit Tour’ ended, both parties finally came to an agreement, and Springsteen and the E Street Band began the marathon sessions recording ‘Darkness on the Edge of Town.’ A year later — ten days before the album was released — Springsteen returned to the stage.

At the time, three years between releases was practically unheard of. Springsteen has often said that he was worried that the general public had forgotten about him in the interim. With punk and disco capturing the public’s imagination during his layoff, he had no idea how the new material would be received, and channeled that into his performance when he took the stage that night in Buffalo.

“What I remember most was the raw emotion that Bruce presented on stage,” Lawrence Kirsch said about that opening night in ‘The Light in Darkness,’ his 2009 collection of essays about the tour. “I would even say he was a bit tentative and nervous. But by the time he launched into ‘Something in the Night’ and screamed so his body shook, we knew that he was going to take no prisoners that night, even if it killed him, and us.”

Concerts on the ‘Darkness’ tour, which ran between 2 hours and 45 minutes and three hours, were broken into two sets. The first often opened with a cover of an early rock song, such as Buddy Holly’s ‘Rave On’ or Eddie Cochran’s ‘Summertime Blues.’ Springsteen then moved into ‘Badlands’ and most of the other songs on ‘Darkness,’ including an extended version of ‘Prove it All Night’ (revived on his current tour) that featured a searing introductory guitar solo. The set closed with ‘Jungleland,’ after which the band took a 15-20 minute break.

Springsteen usually began the second half with a few songs he hadn’t yet released, like ‘Fire,’ ‘Sherry Darling’ or ‘Paradise by the ‘C’,’ a spotlight for saxophonist Clarence Clemons. From there, however, he took fans on a roller-coaster ride through his then-small catalog. ‘She’s the One’ often began with a few verses of ‘Not Fade Away’ or Bo Diddley’s ‘Mona.’ Then it was ‘Growin’ Up,’ which featured Springsteen making up a story dealing with his own frustrations as a teenager with rock and roll dreams before launching into the final verse.

Then it was on to ‘Backstreets,’ which, as it had during the ‘Lawsuit Tour,’ included a stream-of-consciousness break down before the coda that became known as ‘Sad Eyes.’ The section involved Springsteen describing a betrayal by a lover that could easily be interpreted as his anger towards Appel, which took the already-emotional song to new heights. The second set closed, as always, with ‘Rosalita (Come Out Tonight).’ ‘Born to Run,’ ‘Because the Night’ and a cover of Eddie Floyd’s ‘Raise Your Hand’ formed the bulk of the encores on most nights.

A handful of the dates on the ‘Darkness’ tour — most notably Los Angeles (July 7), Cleveland (Aug. 9), Passaic, N.J. (Sept. 19), and San Francisco (Dec. 15) — were broadcast over radio, and the tapes from those shows remain among the most beloved Springsteen bootlegs. In addition, the performance of ‘Rosalita (Come Out Tonight)’ from the July 8 concert in Phoenix was filmed and broadcast the next year on an ABC television special called ‘Heroes of Rock and Roll.’

By the time the tour ended in Cleveland after more than 110 shows on Jan. 1, 1979, Springsteen had graduated from theaters and ballrooms to arenas in his biggest markets. He would soon be filling stadiums worldwide on the heels of the success of ‘Born in the U.S.A.,’ but the ‘Darkness’ tour remains the favorite of many of his most devout fans.

Bruce Springsteen and I

Bruce Springsteen and The Most Important Gig Review in History 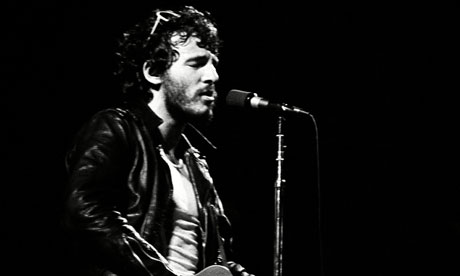 Jon Landau was a music writer who’d failed as a producer, and who was wondering about his place in the world. Bruce Springsteen was on his second album for CBS, but far from a star. The coming together of the two was their making. “Last Thursday, at the Harvard Square theater, I saw rock’n’roll past flash before my eyes,” Landau wrote in a confessional review for the Boston alternative free sheet the Real Paper. “And I saw something else: I saw rock and roll future and its name is Bruce Springsteen. And on a night when I needed to feel young, he made me feel like I was hearing music for the very first time.” Landau’s endorsement was critical for Springsteen’s standing with CBS – the “rock and roll future” line became a key part of the Springsteen mythology. More importantly, it led Springsteen to seek out Landau as a sounding board for his ideas as he prepared his next album. Born to Run made Springsteen a star, and Landau’s contribution was so great Springsteen decided he would be the man to guide him through his career as manager, producer, consigliere – not just his right-hand man, but his right hand.

Discover the limited edition Bruce Springsteen book, The Light in Darkness.
The Light In Darkness is a collector’s edition, we are almost sold out. Less than 200 copies remain. A great companion piece to The Promise box set, it focuses on the 1978 Darkness on The Edge of Town album and tour. Read about the iconic concerts from fans who were there – the Agora, Winterland, Roxy, MSG, Capitol Theatre, Boston Music Hall, The Spectrum and over seventy more!
Click Here to Order Now and Save on Shipping During the Wrecking Ball Tour2013: The Light in Darkness